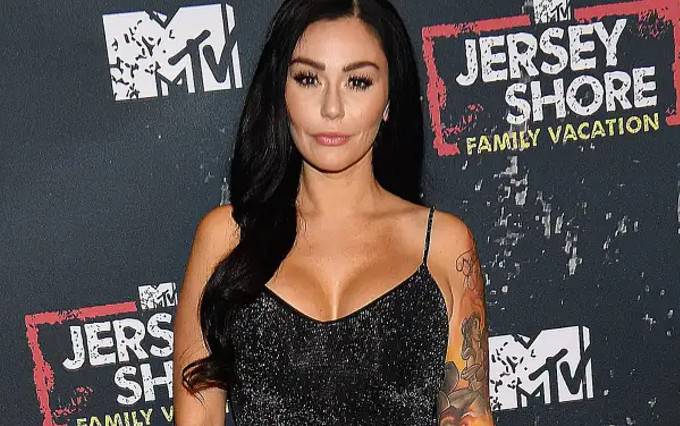 Jenni Farley, better known to the world as JWoww is an American television personality who came to the limelight when she appeared in the MTV reality series Jersey Shore. On the heels of that resounding success, JWoww made headlines with her appearance in its spin-offs, Jersey Shore: Family Vacation and Snooki & Jwoww: Moms with Attitude. Apart from that, she has starred in various TV shows, including the likes of Worst Cooks in America: Celebrity Edition, One Life to Live, Marriage Boot Camp: Reality Stars, Celebrity Family Feud, Floribama Shore, and many more.

She has mixed French, Spanish, and Irish descent.

Jenni was raised by her father Terry Farley.

She attended and graduated from Columbia High School in East Greenbush, New York, and then attended the New York Institute of Technology.

Talking about her personal life, Jenni’s first romantic encounter was with one man named Tom Lippolis. They both dated for more than a couple of years before parting ways.

She then got romantically involved with Roger Matthews, whom she met on the reality show Jersey Shore. After dating for years, they got married on October 18, 2015. They have two children together, daughter Meilani, born on July 13, 2014, and son Greyson, born on May 5, 2016. She filed for a divorce from her ex-husband Roger in September 2018 and it was finalized in August 2019.

Jenni is now in a relationship with wrestler Zack Clayton Carpinello. They were engaged in February 2021.

As of 2023, JWoww’s net worth is estimated to be roughly $4 million dollars.

Prior to appearing on television, she ran a graphic design company Jenni Farley Designs, Inc.

Excited by her curvaceous body, a DJ nicknamed her J-Woww at the Neptune Beach Club in East Quogue.

In 2009, she starred alongside some popular reality television stars in the MTV hit show Jersey Shore. The first season was filmed in Seaside Heights, New Jersey, with other seasons being filmed on some exotic US beaches.

In 2010 she released a book titled The Rules According to JWOWW: Shore-Tested Secrets On Landing a Mint Guy, Staying Fresh to Death, and Kicking the Competition to the Curb.

In 2015, she participated in the cooking reality show, Worst Cooks in America: Celebrity Edition and eventually won the title.

She made her film debut with the 2012 comedy movie The Three Stooges, where she co-starred with some of her Jersey Shore co-stars.

On her 21st birthday, she took breast augmentation surgery.

She has celiac disease.

One of her arms is covered with Disney character tattoos.

She has a black belt in taekwondo.