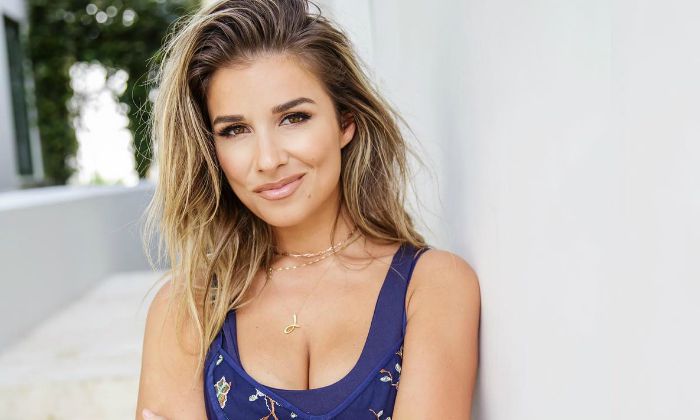 Jessie James Decker is a country singer and songwriter from Nashville, Tennessee, who is probably known for her style of music that blends country sounds with pop and soul music. She is inclined to become a singer at a young age. At just 17 years old, she got her major breakthrough when she caught the eye of Carla Wallace of independent label Big Yellow Dog Music who helped her to launch her music career. She released her first full-length album, Jessie James, in August 2009 to moderate success. Though being a singer, her claim to international fame came only after she appeared on the E! reality show, “Eric & Jessie: Game On” with her husband Eric Decker in 2013.

In 2017, she signed with Epic Records, and her second album, Southern Girl City Lights, arrived in October 2017, which topped the US Billboard Country charts. She followed it up with a full-length Christmas album, On This Holiday, which was released in October 2018. Jessie brings a breath of fresh air to the world of music and will continue to fill the hearts of her fans with her soulful music.

Jessica Rose James was born on the 12th of April 1988, in Vicenza, Veneto, Italy, where her father, a military veteran, was stationed. She is currently 33 years old.

Jessie James Decker is the elder daughter of Karen and Steve Parker, who served as a Colonel in the US Air Force. She has two younger siblings, John and Sydney Rae James.

Since her father was in the U.S. Air Force, her family lived in various places and as a result, she was homeschooled. Further details about her educational qualifications are unknown.

In addition to her burgeoning career as a singer, her personal life has also been thriving. In March 2011, she began dating Eric Decker, a professional football player, who played for the Denver Broncos as a wide receiver. The two met through a common friend, exchanged their numbers, and after days of chatting and talking on the phone, they took their friendship to the next level.

A year later in April 2012, they became engaged and married the following year in June 2013 in a lavish wedding ceremony. They have three children together. The couple welcomed their first child, a daughter, Vivianne Rose Decker, in March 2014. She gave birth to their second child, a son, Eric Thomas Decker II, in September 2015. Their third son, Forrest Bradley Decker was born on March 31, 2018).

Jessie dropped her debut album, Jessie James, on August 11, 2009, via Mercury Records. The album peaked at number 23 on the US Billboard 200, with the album’s lead single, “Wanted” that reached the top 40 on the Billboard Hot 100. It was also certified gold in the US.

Her first television show appearance came in 2009 when she guest-appeared on the talk show, Ellen: The Ellen DeGeneres Show.

As mentioned earlier, Jessie James Decker is one of the few singers in the industry who’s capable of creating music in the country-pop fusion genre. As of November 2019, she has three full-fledged studio albums to her name, and not to mention, her second album, “Southern Girl City Lights”, is one of her finest works.

The album topped the US Top Country Albums chart and debuted at number 18 on the US Billboard 200. It spawned hit singles, ‘Southern Girl City Lights’, ‘Almost Over You’, ‘All Filled Up’, ‘Flip My Hair’, and ‘Pretty Girl’.

Jessie almost became a household name amongst the American television audience with her own reality show, “Eric & Jessie: Game On.” The show premiered on September 29, 2013, on E!, which chronicled the lives of Jessie and her husband Eric Decker. The show was so successful that it had three seasons, ending its final run on October 25, 2017.

As someone who is passionate about what she does, Jessie has made an impressive amount of net worth from her career as a singer. Outside the music world, she is known as a fashion designer and entrepreneur. As of 2023, Jessie’s net worth is estimated at $10 million dollars.

With no doubt, Jessie James Decker has made a name for herself as a singer and songwriter in the pop world, that too, all by herself. This self-made singer, just like other famous celebrities, uses social media to offer a glimpse of her life and to promote her business ventures and other projects.

Jessie also runs a youtube channel under her name, where she shares music videos to her songs, makeup tutorials, and other cool stuff with her subscribers. She’s already followed by over 250,000 subscribers.

She has been singing since she was two years old. By 9, she won her first talent contest in Baker, Louisiana, with a soulful rendition of Patsy Montana’s “I Want to Be a Cowboy’s Sweetheart”

She began writing songs at a young age and performed at SeaWorld and in Warner Robins, Georgia in 2000.

Jessie had auditioned for over two years in and around Nashville and was turned down by every other major country label in Nashville.

Realizing the need to improve her singing and songwriting skills, she made weekly trips to Nashville to hone her skills.

She has released four EPs between 2014 and 2017. Her first and third EPs, ‘Comin’ Home’ and ‘Gold’ debuted at number 5 on the Billboard Country music chart. Her second EP, ‘This Christmas’, debuted at number 16 on the US Country chart whereas her fourth EP, ‘Blackbird Sessions’, peaked at number 33 on the same chart.

In 2015, Jessie launched her clothing line known as Kittenish, a playful fashion line inspired by her personal style with a brick-and-mortar store in Nashville.

She released her first book, titled “Just Jessie”, in October 2018 through Harper Collins Publishers. It is basically an essential guide to living life the way it works for Jessie, inspiring your dreams as you learn how Jessie made hers a reality.

She cites American actress and model, Cindy Crawford as her beauty inspiration.