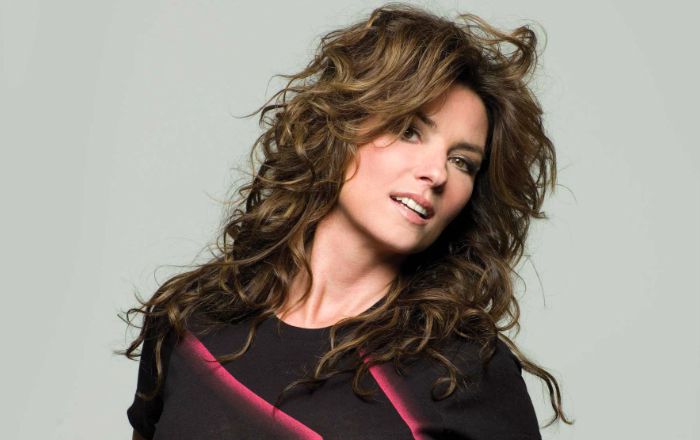 She is currently 56 years old.

Her ancestry is English, Irish, French-Canadian, and Northern Irish.

Shania went to Timmins High and Vocational School in Timmins.

Shania Twain married British singer-songwriter Robert John Lange on December 28, 1993. They have a son named Eja D’Angelo, born on August 12, 2001. The couple was separated in May 2003, after Lange allegedly had an affair with Twain’s best friend, Marie-Anne Thiébaud. Their divorce was finalized on June 9, 2010

Shania Twain started off her singing career at the age of 8 where she used to sing at local bars in Timmins to support her family bills. While at school; she was part of the local band called Longshot. Aspired to become a singer, she recorded a demo tape and send it across record labels. Her self-titled debut album ‘Shania Twain’ was released in 1993, which brought her little fame.

It was her second album, “The Woman in Me”, released in 1995, earned her widespread acclaim and recognition. The album was a huge success that sold more than 20 million copies worldwide, peaking at No.1 in the U.S. Billboard Top Country Albums. It went on to become one of the biggest selling albums in Canadian music history, earning her a Grammy Award.

Her third album, “Come On Over”, released in 1997, topped the music charts in Canada, the US, the UK and other countries for several weeks. The album became the best-selling studio album of all-time by a female act in any genre and the best-selling country album, selling nearly 40 million copies worldwide. She earned four Grammies among other several accolades. She released her fourth and fifth albums, titled “Up!” and “Now”, respectively in 2002 and 2017.

In 2004, Shania appeared in the comedy film “I Heart Huckabees” where she performed a song.

Shania Twain made her debut TV appearance in an episode of the comedy talk show Late Show with David Letterman in 1995.

As of 2022, Shania Twain has a net worth of $400 million. She spends her time between Switzerland and New Zealand. She has a large fleet of exotic cars from the makers like Bentley, Jaguar, Bentley, and Porsche.

She had a difficult childhood as her parents divorced when she was two and lived with her mom and step-dad. She used to perform at bars in Timmins, earning $20 between midnight and 1 a.m.

Shania Twain has said of the ordeal, “My deepest passion was music and it helped. There were moments when I thought, ‘I hate this.’ I hated going into bars and being with drunks. But I loved the music and so I survived.”

Twain penned her first song at the age of 10.

She’s one of the finest country singers in her generation, who has won five Grammy Awards, 27 BMI Songwriter Awards, and received stars on Canada’s Walk of Fame and the Hollywood Walk of Fame.

She was inducted into the Canadian Music Hall of Fame on June 25, 2003.

In 1995, Shania was included in the list of the “Most Intriguing People” by People Weekly Magazine.

She was named the 1999 Entertainer of the Year by both the Academy of Country Music and the Country Music Association; Twain was the first non-US citizen to win the CMA award

In 2005, Twain was inducted into the Hair Fan’s Hall of Fame.

She has named her German Shepherd dog ‘Tim’ after her hometown of Timmins.

In January 2017, it was announced that Twain will have her own exhibit at the Country Music Hall of Fame titled Shania Twain: Rock This Country, which will open on June 26 and run through 2018.

In April 2018, she was caught into controversy for making an “awkward” remark quoted in a Guardian interview, in which she said she would have voted for Trump if she could have. This created an outrage on social media to which she responded with an apology. She tweeted, “I would like to apologize to anybody I have offended,” she wrote. “The question caught me off guard. As a Canadian, I regret answering this unexpected question without giving my response more context.”