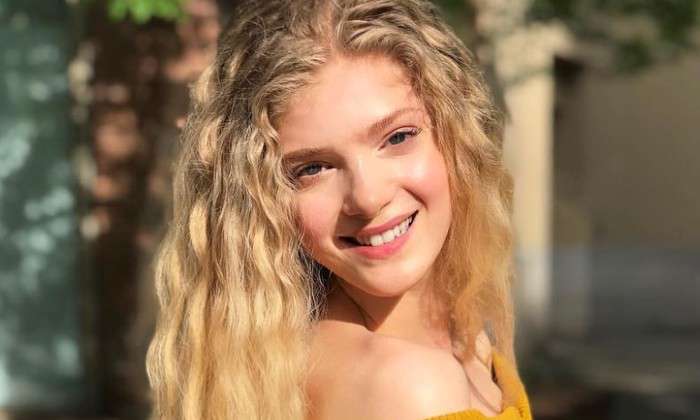 Elena Kampouris is an American actress who became known for her starring roles as Maya Decker in the NBC drama series American Odyssey, and as Minnow Bly in the drama series Sacred Lies. Her film credits include Men, Women & Children, My Big Fat Greek Wedding 2, Before I Fall, Summer Night, and Shoplifters of the World, among other movies she has starred in so far in her career. She has most recently starred in the Netflix series Jupiter’s Legacy, playing Chloe Sampson opposite Josh Duhamel, Ben Daniels, and Leslie Bibb.

Elena Kampouris was born on the 16th of September 1997, in New York City, United States of America. She is the daughter of Alexander Kampouris, who owns a boutique wine store in Basking Ridge, New Jersey, and Ivey Barry, a fashion illustrator, and designer.

Her father, who is of Greek descent, is originally from the island of Kassos while her American mother has English and French heritage. She has one older brother named Emmanuel. and attended Gill St. Bernard’s School, located in New Jersey.

Elena hasn’t divulged too many details about her personal life though she’s often linked with her co-stars. The actress is believed to be single and apparently focused on her acting career.

Despite being so young, Elena has already garnered so much attention for herself in the entertainment industry. She has been acting for years now, kick-starting her career in 2012 with a guest role in an episode of The CW teen drama series Gossip Girl.

Soon after, she starred in a television movie titled Jinxed, playing the role of Ivy Murray, and made her big-screen debut in the movie Labor Day as Young Rachel McCann in 2013. Her acting career began to take off with her landing major roles in Men, Women & Children, American Odyssey, My Big Fat Greek Wedding 2, and Before I Fall.

Elena’s first major breakthrough came in 2021 when she joined the cast of Netflix’s Jupiter’s Legacy as Chloe Sampson. Based on the comic book series by Mark Millar and Frank Quitely, the superhero series stars an ensemble cast, including the likes of Josh Duhamel, Ben Daniels, Leslie Bibb, Mike Wade, and Matt Lanter.

It’s no doubt that her role in Netflix’s Jupiter’s Legacy would make Elena a whole lot of dough. All of her professional endeavors have made Elena really super-rich. The 24-year-old is estimated to be worth around $700 thousand dollars and with a number of projects under her belt, that number is likely to increase very soon.

Elena made her Broadway debut as Cécile Volanges in a 2016 production of Les Liaisons Dangereuses, also starring Liev Schreiber and Janet McTeer.

She appeared alongside Ciara Bravo in the Nickelodeon movie Jinxed.