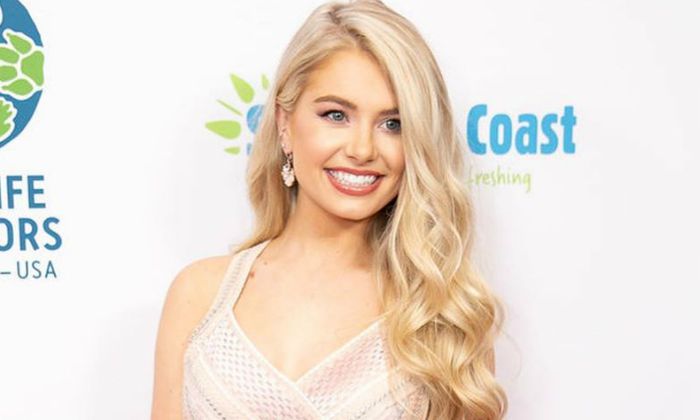 Demi Burnett is an American reality star and model from the rural town of Red Oak, Texas. She became known for her time on the twenty-third season of The Bachelor. She caught the spotlight again lately in 2019 after it was revealed that she would be returning for the 6th season of Bachelor in Paradise. The show’s trailer features the same-sex relationship, the first of its kind in the ABC dating show.

Demi Burnett was born on the 21st of February 1995, in Dallas, Texas, United States of America. She is currently 26 years old.

Speaking about her family and childhood, very little is known as the young blonde refrains from sharing her personal stuff like her parents’ name, siblings and her early life to the media.

Her mother, Tina Jean Jordan, had served 18 months jail term in federal prison for bank fraud while she was filming The Bachelor and was eventually got released before Demi was sent home from the show. She also served her time in prison back in 2007 for committing grand theft and forgery and violating her probation.

During her time in The Bachelor, she revealed that she was living with her dad and stepmom. Despite having a solid relationship with her mother, Demi is very close to her father, who’s very supportive of career choice. She has a younger brother named Drake Burnett.

Information regarding her education is unknown. however, she was in Zeta Tau Alpha sorority at the university she attended.

During her time on The Bachelor, Demi revealed that she has never been in a serious relationship. She was very much excited as he never dated a virgin since she was 12 but ultimately, she failed to win over the heart of Colton Underwood.

Reports were swirling around that Demi is dating another woman named Kristian Haggerty, a Bachelor Nation newcomer. The two began seeing each other in February 2019. They will be featuring in the new season of the Bachelor in Paradise and likely to get engaged.

She was raised in rural Texas and is a proud country girl.

Her favorite Game of Thrones character is Jon Snow and she loves him so much that she wanted to have a dinner date with him.

She has revealed that she wanted to be the first petite Victoria’s Secret Angel – with an entourage known as the “Demi Angels.”

She worked as an interior designer before participating in The Bachelor.

Demi Burnett has recently told that she would probably start her own YouTube channel anytime soon and move to Los Angeles from Dallas.

Demi’s Instagram page has over 700k followers and you can often see her promoting beauty products on it.