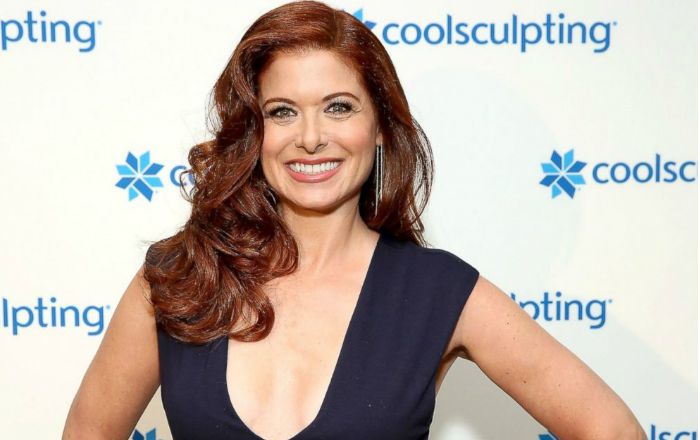 Debra Messing is an American actress who is perhaps known for her starring role as Grace Adler in the NBC sitcom ‘Will & Grace’ for over 8 years, which earned her six Golden Globe Award nominations and five Primetime Emmy Award nominations for Outstanding Lead Actress in a Comedy Series, winning one in 2003.

Debra Messing is the daughter of Sandra (née Simons), a former professional singer, banker, and travel and real estate agent, and Brian Messing, a sales executive for a costume jewelry packaging manufacturer. She has an older brother named Brett Messing.

Debra attended East Greenwich High School where she acted in several school productions including the starring roles in the musicals Annie and Grease.

Later, she got admission to the elite Graduate Acting Program at New York University’s Tisch School of the Arts. She earned a Master of Fine Arts after three years

Debra Messing married actor and screenwriter Daniel Zelman on September 3, 2000, and separated after eleven years of marriage in December 2011. They filed for divorce on June 5, 2012, which was finalized on March 1, 2016. They have a son together named Roman Walker Zelman, born on April 7, 2004.

After her split with her ex-husband, she started dating actor Will Chase in late 2011. However, they ended their relationship in October 2014.

Debra Messing made her on-screen debut in the romantic comedy movie, A Walk in the Clouds in 1995.

In 1994, Debra Messing first starred in the police procedural TV show, NYPD Blue for her role as Dana Abandando.

Debra Messing is famous for portraying Grace Adler in the popular NBC sitcom, Will & Grace. For her stellar performance in the show, she won 5 Primetime Emmy Award nominations and 6 Golden Globe Award nominations. She managed to win an Emmy for Outstanding Lead Actress in a Comedy Series.

She also starred as Molly Kagan, the ex-wife of a Hollywood film mogul, on the television miniseries The Starter Wife, for which she received two Golden Globe nominations, a Primetime Emmy Award nomination, and a Screen Actors Guild Award nomination for her performance.

Debra Messing has an estimated net worth of $25 million US dollars as of 2023. She takes $125 thousand as salary per episode. She made a huge amount of money from television and films, not to mention her lucrative brand endorsement deals.

During her school days, Debra acted and sang in several productions at East Greenwich High School. She also took lessons in dance, singing, and acting.

In 1986, she won Rhode Island’s Junior Miss competition that paved way for her to compete in America’s Junior Miss scholarship program.

In 2002, she was included in the list of “50 Most Beautiful People in the World” by People magazine. The following year, she was named as “Best Dressed Woman” in 2003 by TV Guide.

If not an actress, she could have been a litigator.

In 2005, she was conferred with the Women in Film Lucy Award in recognition of her excellence and innovation in her creative works that have enhanced the perception of women through the medium of television.

Debra was a judge on the season finale of the second season of Bravo’s reality show, Project Runway.