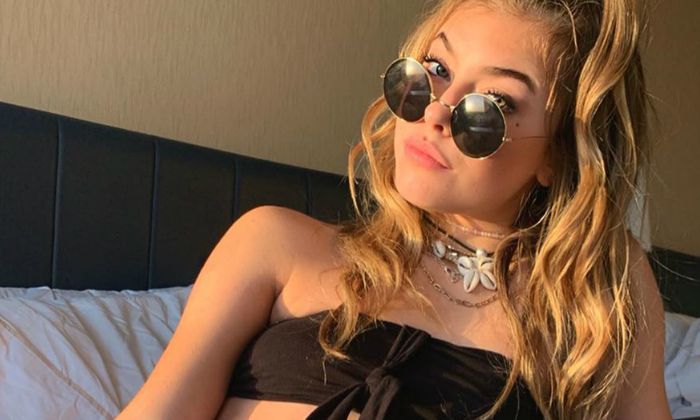 Cynthia Parker is a young talented cutie from Toronto, Ontario, Canada who is best known as a TikTok star and social media influencer. She has gained over 5 million fans to her “cynthiaparkerrrr” TikTok account. She came to prominence for her lip-syncing and dancing videos on TikTok and has accrued over 280,000 followers to her Instagram account. Just like other social media stars, Cynthia has collaborated with many TikTokers to make videos that keep entertaining us for hours. As a passionate actress and dancer, Cynthia is inclined to make a mark in showbiz.

Cynthia Parker was born on the 27th of September 2004, in Toronto, Ontario, Canada. She is currently 17 years old.

Not much is known about her personal matters as she has not revealed many details about this aspect of her life. She prefers to keep her profile very low as she respects her family’s privacy and wants to keep them away from media attention.

She was raised by her mother Tonya in Ontario, where they live with their dog, Stormi. Details about her formal education are unknown.

Indeed, fans of Cynthia Parker are much more likely bewildered and they are also more worried when it comes to her relationship status. She is in a relationship with fellow social media star Quinton Griggs.

Things didn’t go well between Cynthia and her ex-boyfriend Chase Hudson, who is also a TikTok sensation, and they called in splits in July 2019. In fact, they started dating around February 2019, and Cynthia was less popular at that time.

As a Gen Z kid, Cynthia Parker grew up watching online videos as well as witnessing the growth of social media. Over time, she got acquainted with the social media thing and launched her TikTok account as a teenage girl. As time goes she became popular on the short-form video sharing platform, where she currently has 5 million followers on her TikTok handle, @cynthiaparkerrrr.

She mostly posts lip-sync videos to the songs of her favorite artists, Andre Swilley and Ariana Grande. In addition to posting solo performances to her TikTok account, she, at times, collaborates with other popular TikTokers as well.

She is represented by the Los Angeles-based talent company called Paramore Entertainment.

In September 2019, she had a piercing on her belly button.

She has an online merchandise store, which offers items like T-shirts and sweatshirts.

Parker is an accomplished dancer and aspires to become a dance someday.

She has made videos with fellow TikTok stars such as Chase Hudson, Ashley Chainz, Zoe Laverne Pemberton, and others

Her Snapchat username is Cythia.parkk.

She divides her time between Burlington and Toronto in Ontario, Canada.