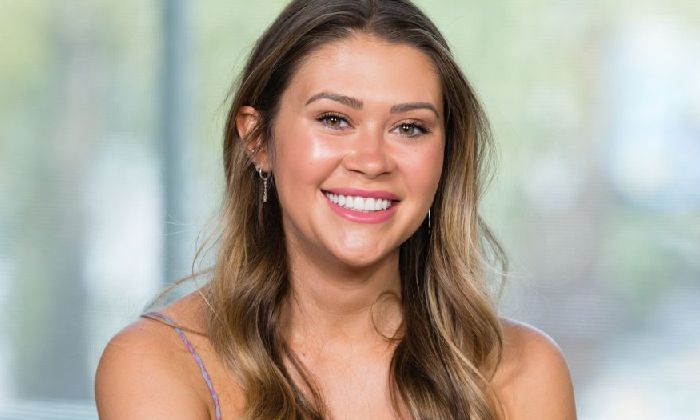 Caelynn Miller-Keyes is an American former beauty queen, model, and television personality. She has made a career for herself by winning the Miss Virginia Teen USA 2013 and Miss North Carolina USA 2018. She was the first runner-up at the Miss USA 2018 competition.

Miller-Keyes became even more popular when she appeared in Colton Underwood’s season of The Bachelor as a contestant. She gained much attention and made headlines when she revealed on national television that she was sexually assaulted during her sophomore year of college.

Caelynn Miller-Keyes was born on the 15th of June 1995, in Fredericksburg, Virginia, United States of America. She is currently 26 years old.

Caelynn Miller-Keyes is the only daughter of Jerry Keyes and Jai-Leah Miller. Her father was a former Field Agent at Secret Intelligence Service. Her parents divorced when she was young. Following the divorce, her mother remarried John Kamenicky. She was raised by her mother and stepfather.

She has two siblings, Tanner Austin Keyes and Arianna Miller-Keyes. Her paternal grandmother was the first woman to become head of the Federal Bureau of Investigation in Los Angeles.

She’s a college graduate, having attended Stafford Senior High School in Falmouth, Virginia and studied broadcast journalism at Virginia Commonwealth University. She graduated from college in 2017.

Caelynn Miller-Keyes has been in a relationship with Dean Unglert since she met him on season six of Bachelor in Paradise. Though the couple has been dating for quite a while, they were supposed to not open up about their relationship until the show aired.

The two quickly caught the attention of the audience and Dean broke up with her at some point in the show. But quite, fortunately, he returned to the show and eventually they reconciled. Long story short. The couple ended up leaving the show together and made a few trips around the world. It appears that Caelynn and Dean are more serious about their relationship than before.

While Caelynn is talented in her own right, she is also known for being crowned Miss Virginia Teen USA 2013 and Miss North Carolina USA 2018. She began pursuing her career as a social media consultant while studying in college as well as competed in beauty pageants.

In 2013, she ran for Miss Virginia Teen USA and eventually won the title. She took part in Miss Teen USA 2013, representing her state Virginia, but did not win the pageant.

In an effort to further her level of success, Caelynn Miller-Keyes appeared on the 23rd season of The Bachelor as a contestant in 2019. She finished the show in fourth place.

At such young age of 24, Caelynn Miller-Keyes has accomplished many things that she can be proud of. She might be known best for being crowned Miss Virginia Teen USA 2013 and Miss North Carolina USA 2018 and placing the first runner-up at the Miss USA 2018 competition.

She gained widespread attention after appearing on season 23 of The Bachelor that would star professional football player Colton Underwood.

Caelynn’s enjoying quite a following on social media. She is very active on Instagram, which happens to be her largest social media platform, where she has over 1.5 million followers. Her Instagram offers a glimpse into her personal life, inculcating her dating life, where you can find a ton of pictures of her having a good time with her boyfriend, and can also binge on more photos.

Her grandmother is her mentor and role model.

As a child, she was diagnosed with encephalitis and was told by doctors she only had a 10% chance of ever walking again; she ultimately ended up fully recovering

In 2016, she interned at WTVR-TV. She would later work at Pink (Victoria’s Secret), as a social media consultant, creating social media content for PINK’s app, Instagram, and emails.

She knew Hannah Brown even before appearing together on The Bachelor in 2019. They were actually roommates during the Miss USA 2018 competition.

Caelyn is a sexual assault survivor.