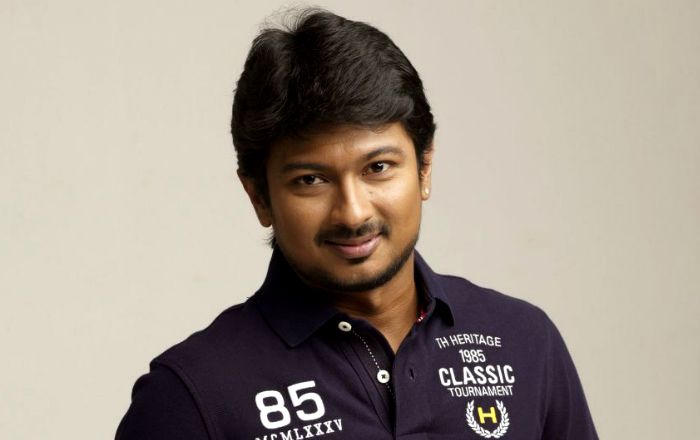 Udhayanidhi Stalin is an actor-turned-politician from Chennai, Tamil Nadu. He currently serves as a member of the Tamil Nadu Legislative Assembly from the Chepauk-Thiruvallikeni constituency.

He started off his showbiz career as a producer and later got into acting. He’s best known for his stint in the 2012 Tamil film Oru Kal Oru Kannadi, which earned him Filmfare Award South and SIIMA Award. He has produced a host of movies under the banner Red Giant Movies including Kuruvi, Aadhavan, 7aum Arivu, and many others. His credits as an actor include Idhu Kathirvelan Kadhal, Manithan, and Nimir.

He’s is of Telugu and Tamil descent.

Udhayanidhi Stalin married his longtime girlfriend, Kiruthiga, in 2012. She is the Editor-in-chief of lifestyle magazine Inbox 1305 and also a film director. They have two children together, a son, Inbanithi, and a daughter, Tanmaya.

As a producer, he first bankrolled the 2008 Tamil film Kuruvi, which starred Vijay and Trisha in the lead roles.

In addition to the films produced by his production house, he has also distributed a number of films through his banner Red Giant Movies.

His role as Saravanan in Oru Kal Oru Kannadi and as Sakthivel in Manithan were highly appreciated by critics and movie goers.

Udhayanidhi is an elected member of the Tamil Nadu Legislative Assembly and represents the Chepauk-Thiruvallikeni constituency. When he contested for the 2021 Tamil Nadu legislative Assembly, he submitted an affidavit to the election commission declaring his wealth and income.

He lives with his family in a lavish house in Chennai and owns many exotic cars, including Hummer H3.

During the early stage of his career in cinema, he did cameos in movies he produced and later started starring in lead roles.

Despite the fact that his father and grandfather are atheists and actively involved in politics, Udhayanidhi practices Hinduism and an ardent devotee of Goddess, Durga. However, he has recently come up as an atheist.

In early 2018, he announced that he is going to venture into active politics besides acting in films.

On 4th July 2019, he replaced M. P. Saminathan as the Secretary of DMK’s Youth Wing.

According to the affidavit that he submitted to the election commission for the 2021 Tamil Nadu legislative Assembly, he has been booked under 22 criminal cases.