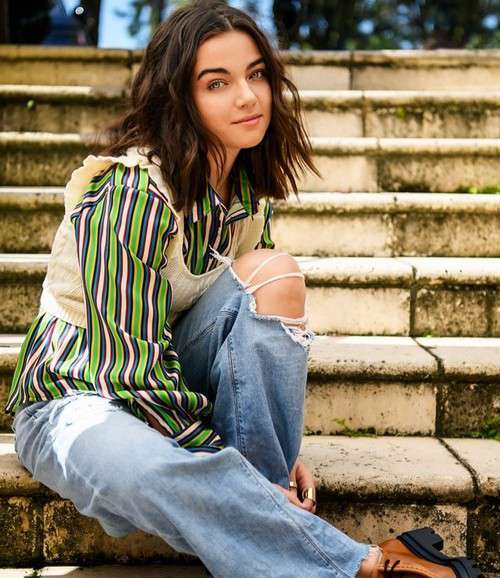 Taegen Burns is an American actress who caught the spotlight after appearing in Disney’s television adaptation of The Mighty Ducks: Game Changers, a sports comedy-drama series that stars Lauren Graham, Brady Noon, and Emilio Estevez. This isn’t only her acting credit as she has appeared in several other productions like Michael Jackson: Searching for Neverland, The Right Stuff, I Can Only Imagine, Dumplin’, and Blue Ridge. She’s quite a promising and upcoming actress who has already garnered a decent following on her @taegen.burns Instagram account.

Taegen Burns was born on the 21st of April 2007, in the United States to her parents. She hasn’t revealed too many details about her family, education, and childhood except that she has three brothers but their names are unknown. She’s American by nationality and her birth sign is Taurus.

Given the fact that Taegen is barely 13-years-old, it’s highly unlikely that she’s entered the world of dating. There are no credible sources to confirm the existence of a boyfriend, as well as a lack of evidence on any of her social media profiles.

Taegen Burns started with modeling while appearing in television commercials and print ads. She then branched out into acting in 2017, playing the role of Paris Jackson, the daughter of Michael Jackson and Debbie Rowe, in the television film titled Michael Jackson: Searching for Neverland.

Burns made her feature film debut in the 2018 Christian biographical drama film, I Can Only Imagine, portraying Young Shannon Street. She then went on to appear in movies like Blue Ridge and Dumplin.

She got her mainstream success with her portrayal of Laura Shepard in the TV series The Right Stuff, co-starring with Patrick J. Adams, Jake McDorman, and Colin O’Donoghue.

Her next major breakthrough came in 2021 when she landed a part in the Disney sports comedy drama, The Mighty Ducks: Game Changers, which became her first effort to gain international fame and recognition.

Having said that, Taegen Burns’s acting career has just started and there’s a lot more way to go.

She was seen playing Young Ellen “Elle” Dryver alongside Danielle Macdonald and Jennifer Aniston in the 2018 coming-of-age comedy film Dumplin.

When not in the shoot, she utilizes her time with sketching, painting, photography, and exploring new places.

She’s quite a sports enthusiast, and in her free time, she enjoys playing soccer, basketball, and tennis.