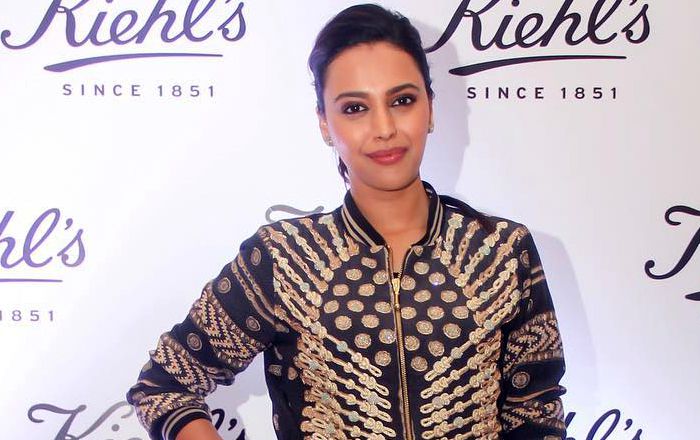 Indian actress Swara Bhaskar is famous for her roles in Bollywood films such as Tanu Weds Manu, Raanjhanaa, Nil Battey Sannata, and Prem Ratan Dhan Payo. In April 2018, she came under fire for a tweet she posted in support of Kathua and Unnao rape victims but her choice of words has offended a fraction of the Indian masses leading to the trend #BoycottAmazon on Twitter for her association with the company’s promotional campaign. A faction of people deleted their Amazon accounts as well as uninstall the app on their mobile devices.

Swara Bhaskar was born as the only girl child to Indian parents Chitrapu Uday Bhaskar, an Indian Navy Officer, and Professor Ira Bhaskar. She has one brother whose name is not known. Swara belongs to Telugu and Bihari ancestry.

She attended Sardar Patel Vidyalaya school in New Delhi and graduated with a degree in studied English literature from Delhi University’s Miranda House, New Delhi. She earned her master’s in Sociology from Jawaharlal Nehru University, Delhi.

She is currently dating Himanshu Sharma.

Swara made her acting debut in the 2009 film “Madholal Keep Walking” for her role as Sudha M. Dubey.

In 2014, she hosted the show “Samvidhaan: The Making of the Constitution of India” on Rajya Sabha TV. She also hosted the famous TV show Rangoli on DD National from 2015 to 2017.

After graduation, she worked at N. K. Sharma’s “Act One” theater group in Delhi.

Swara moved to Mumbai to try her luck in acting and landed a role in the 2009 film Madholal Keep Walking.

She won Screen Awards for Best Supporting Actress for her role in Raanjhanaa and  Best Actress – Critics Awards for Nil Battey Sannata.

In April 2018, Swara Bhaskar tweeted in support of Kathua and Unnao rape victims but it went against her due to her choice of words. It created outrage on Twitter leading some angry people to uninstall the Amazon app from their phones and even giving a one-star rating because of its association with the actress.

In 2018, she won the Confident Beauty of the Year Award at the Lux Golden Rose Awards for her role in Veere Di Wedding.