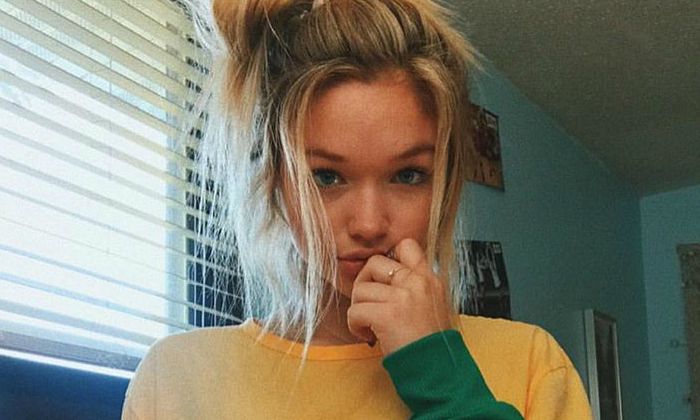 Signa Mae is an American social media personality and TikTok star who is insanely popular for her lip-sync videos on the app TikTok. She started uploading videos to the app when she was 12 years old. In the course of three years, her account has grown massively and gained over 5 million fans. The young talent, who is also a volleyball player, was a member of the Minnesota Select Volleyball Club.

Signa Mae was born on the 18th of September 2003, in Maple Grove, Minnesota, United States of America. She is currently 18 years old.

Signa Mae was second among four children to Matt O’Keefe and Shannon Ottmar. She has two younger siblings, a brother named Aaden O’Keefe and a sister named Sophia O’Keefe. Her older brother, Beau O’Keefe, died at a young age.

Mae’s parents divorced when she was young and her father eventually married a woman named Carrie. She lives with her mother and siblings in Minnesota.

Concerning her education, Signa is studying at Maple Grove School in her hometown of Maple Grove. Besides academics, she is also actively involved in sports and an active member of her school Volleyball team Minnesota Select Volleyball Club.

Very little is known about her romantic life. She briefly dated Braydon Wald, a fellow TikTok (formerly Musical.ly) star, in 2017. He is also from Minnesota. The two ended their relationship in early 2018.

Just like any other kid of her age, she grew up watching videos online which later drove her attention towards social media. She launched her online career at the age of 12 when she created an account for herself on the musical.ly app.

Not long after, she gained a massive fan base with her lip-sync videos gaining tens of thousands of likes and views. One of her very first videos that captured the attention of a lot of people was titled “ha my smiles ugly but #SmileChallenge.”

She made a video series known as Skylar Grey’s “Coming Home” as a tribute to her late brother which inspired many of her fans to face the same problem. The set went viral on the app eventually gained a lot of fans. She has over 5 million fans on the app and around 900k followers on Instagram.

Details about her net worth are unknown.

She is very close to her mother and considers her as her biggest inspiration.

Signa played as a middle blocker for Minnesota Select Volleyball Club. Her jersey number was 24.

She cites English actor and model Emma Watson as her biggest inspiration.