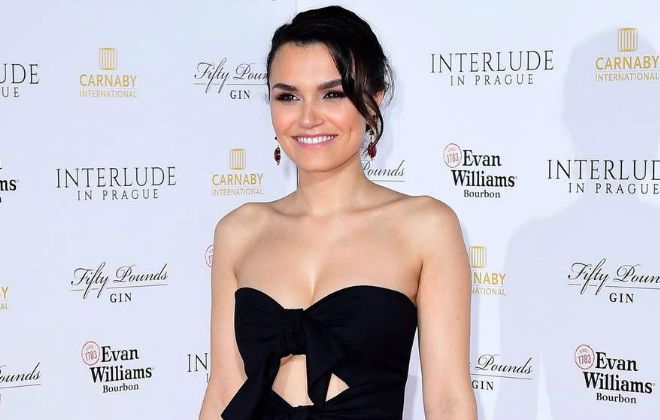 Samantha Barks is an English actress and singer best known for her portrayal of Éponine in the 2012 film version of Les Misérables, which earned her several accolades, including an Empire Award for Best Female Newcomer. She first gained fame as a finalist in the BBC talent search show, I’d Do Anything, which was for a new, unknown lead to play Nancy in a West End revival of the British musical Oliver!. She has also starred in many theater productions, including the City of Angels, Les Misérables, Honeymoon in Vegas, and Pretty Woman: The Musical.

Samantha Barks was born on the 2nd of October 1990, in Isle of Man, United Kingdom. She is currently 31 years old.

Samantha Barks is the younger daughter of Richard Barks and his wife Ann Barks. She was raised by her parents in their home in Laxey, on the Isle of Man, alongside her two older siblings, Kim and Carl Barks.

Samantha Barks had dated American singer Nick Jonas from 2011 to 2011 and began dating British model, David Gandy in early 2013, which didn’t work as well. They broke out in October 2013.

She was romantically linked to English actor Richard Fleeshman from 2013 to 2014. She got engaged to Broadway actor Alex Michael Stoll on February 1, 2021. They first met on the sets of the Broadway production of Pretty Woman and began dating shortly after.

In 2008, Samantha competed in BBC’s talent show-themed television series I’d Do Anything as herself. She made it to the finals in a search for a new, unknown lead to play Nancy in a West End revival of the British musical Oliver!, in which she finished third.

Samantha released her debut album, “Looking in Your Eyes” in April 2007. Besides, she has also contributed to the soundtracks of many movies.

For her stellar performance in the 2012 romantic musical drama film, Les Misérables.

Through her acting accomplishments, Samantha Barks has managed to accumulate $2 million dollars as her net worth.

She began training in Ballet, Modern, and Tap forms of dancing when she was three years old.

In 2007, she participated in the Maltese International Song Competition and won the title of Best Foreign Singer. She also won the cash prize of €2000.

She moved to London at the age of 16 to pursue a career in singing.

Samantha earned the role of Éponine in the 2012 film adaptation of Les Misérables over several renowned actors, such as Lea Michele, Scarlett Johansson, and Taylor Swift.

She made her American solo concert debut in the summer of 2017 at Feinstein’s/54 Below in New York City.