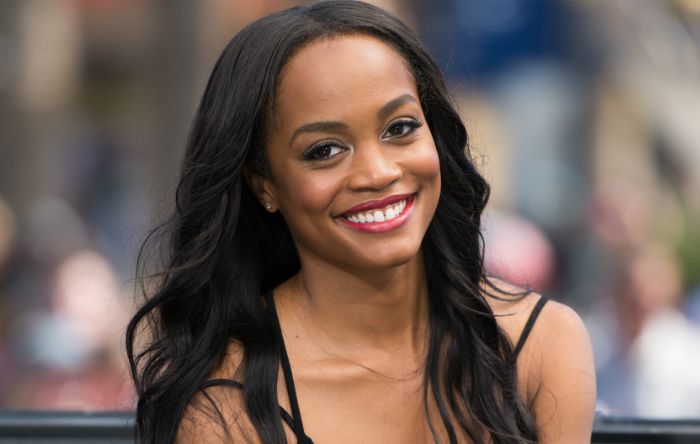 Rachel Lindsay is an attorney and television personality, known for playing as a contestant on the twenty-first season of ABC’s The Bachelor and as the lead on the thirteenth season of The Bachelorette. She became the first Afro-American to star in a lead role in Bachelorette history.

Rachel Lindsay was born on the 21st of April 1985, in Dallas, Texas, United States of America. She’s currently 37 years old.

Rachel attended the University of Texas in Austin from which she graduated with Bachelor’s degree in sports management and kinesiology in 2007. She received her law degree from Marquette University in 2011.

Rachel Lindsay has been dating her co-star Bryan Abasolo since early 2017. They both starred in the 13th season of the reality TV show, The Bachelorette. They got engaged in the season’s finale and married on August 24, 2019, in Cancun, Mexico.

Past that, she dated Nick Viall, with whom she appeared on the 21st season of the reality TV show, The Bachelor.

Rachel made her first TV show appearance as a contestant on the 21st season of ABC’s The Bachelor in 2017.

She became one of the main cast on the thirteenth season of The Bachelorette.

She was the first African American woman to be made the bachelorette in the history of the show.

She has got many tattoos on her body, including bible verse on her left as well as inked  ‘Reciprocity’ on her right ribcage.

In July 2018, Lindsay was a guest host on ESPN’s First Take.

In May 2020, Lindsay launched a podcast Higher Learning with co-host Van Lathan.

Rachel released her book, Miss Me With That: Hot Takes, Helpful Tidbits, and a Few Hard Truths on January 25, 2022.