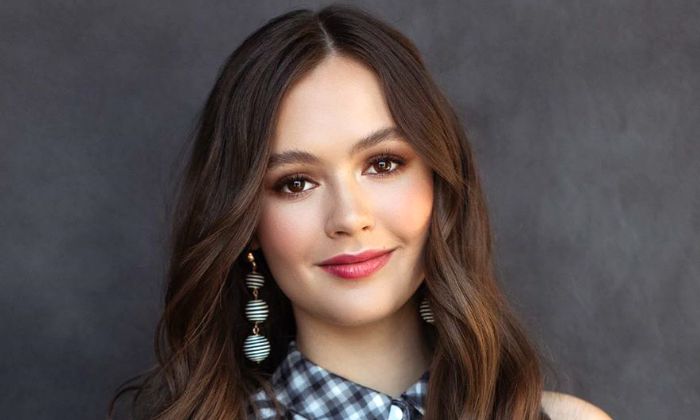 Hailing from Southern California, Olivia Sanabia is an actress and singer, who rose to prominence for her role as Kelly Quinn in the TV series Just Add Magic. In 2018, she joined the cast of Disney’s “Coop and Cami Ask the World” and has been playing the character of Charlotte since then. in addition to her notable roles, she also had guest spots in TV series such as Sam & Cat, Nicky, Ricky, Dicky & Dawn, and Life in Pieces.

Olivia Sanabia was born on the 13th of April 2003, in Corona, Southern California, United States of America. She is currently 18 years old. Find out with which celebrities Sanabia shares her birthday.

Unfortunately, there’s not much-known information regarding her parents, including their names and professions, as she prefers to keep that aspect of the information under the wraps. She has an older sister named Savannah Sanabia.

Olivia attended Santiago High School. She’s inclined to become an actress at a very young and took great efforts to establish herself in the show business.

Now, this is the topic that most of you are probably looking forward to. But, unfortunately, there is not a lot we have to share regarding the romantic matters of Olivia Sanabia.

Olivia, unlike other performing artists in the show business, is reluctant to discuss her relationship status with the media. Based on her social life, she is single for sure. It may be due to the fact that she is quite new to the industry and certainly doesn’t want to catch up with controversies and rumors.

Olivia landed her first acting role when she was eight years old in 2011, playing the role of a young girl in the adventure comedy film Tangled Up in Blue.

After appearing in a string of short films, Olivia Sanabia made her television debut in 2013 with a minor role in the comedy TV series The Birthday Boys.

Olivia Sanabia had her first major breakthrough in 2016 when she was cast as Kelly Quinn in the Amazon Studios’ family drama, Just Add Magic. Based on Cindy Callaghan’s book of the same title, the series featured an ensemble cast including, Abby Donnelly, Aubrey Miller, Judah Bellamy, Andrew Burlinson, and Amy Hill, among others.

As a series regular, Olivia had her part in all of the three seasons and reprised her role in the spinoff series Just Add Magic: Mystery City as well. It premiered on January 17, 2020. She received huge praise for her performance in the series from critics which eventually earned her a nomination at the Young Artist Awards in 2016.

With the newfound fame, Olivia became one of the most sought after teen actress in the business that eventually led to the role of Charlotte Wrather on Disney’s comedy series, Coop & Cami Ask the World.

So, how much wealth has Olivia Sanabia accumulated as of 2023? through her works and accomplishments, Olivia Sanabia has earned a net worth of $500,000, all of which comes from her film and TV appearances.

She caught the acting bug at a very young age but she’s very interested in music.

Olivia has been singing since she was two years old.

Before gaining fame as an actress, Olivia has featured in over two dozens commercials for Nickelodeon, Ford, and Disney, among many others.

She’s excelled in the craft of acting and singing, thanks to the extensive years of training and practice.

At age 8, she appeared in an ad campaign for a major brand alongside Jennifer Garner.

She dropped her first single “Star Crossed” in November 2019.