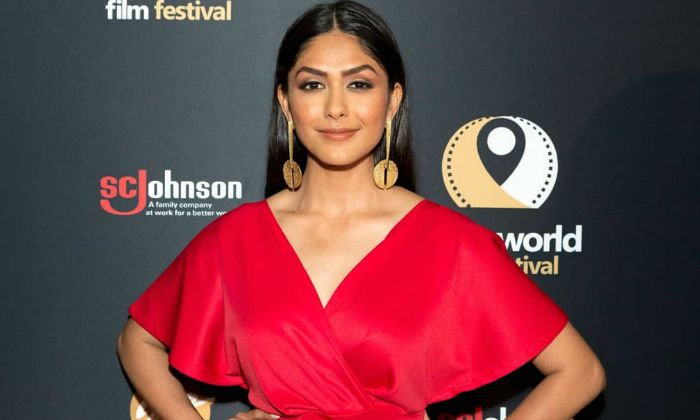 Mrunal Thakur is an Indian actress who is probably known for her role as Bulbul in the ZEE TV soap opera, Kumkum Bhagya. Talking about her film roles, she played the title character of Sonia in the 2018 Bollywood film, Love Sonia and Ritu Rashmi in the 2019 biographical drama film, Super 30. Her film credits include Batla House (2019), Dhamaka (2021), and Jersey (2022).

Mrunal Thakur was born on the 1st of August 1992, in Nagpur, Maharashtra, India. She is currently 30 years old.

Speaking about Mrunal Thakur’s family, her father, Udaysing B Thakur, is a banker. Her mother’s name is not known. She has two siblings, an older sister Lochan and a younger brother, Mandar Thakur.

After completing her high school studies, she enrolled at the Kishinchand Chellaram College in Mumbai, from where she graduated with a Bachelor of Mass Media (BMM) degree in Journalism.

She was previously in a long-term relationship with her ex-boyfriend dubbed writer Sharad Chandra Tripathi. They appeared together in the seventh season of Nach Baliye in a bid to convince their family who were against their marriage because of caste-related issues. However, at the end of the show, they broke up.

Mrunal Thakur made her acting debut with the Marathi-language film, ‘Vitti Dandu’ in 2014. Directed by Ganesh Kadam and bankrolled by Ajay Devgn, she played the role of Sandhya alongside Dilip Prabhavalkar and Ashok Samarth.

Her Bollywood debut came in 2018 with the film Love Sonia. She played the title character along with stars including Riya Sisodiya, Freida Pinto, Demi Moore, among many others. The film was premiered at the London Indian Film Festival in June 2018. Talking about skin trade and trafficking, the film revolves around two sisters, where the lead character is sold to a brothel by her debt-ridden father while the other attempts to rescue her.

Mrunal got her start as an actress in 2012 when she was cast as Gauri Bhonsle Gaikwad in the Hindi-language soap opera, ‘Mujhse Kuchh Kehti…Yeh Khamoshiyaan.’

Her part in the drama flick, Love Sonia, is still considered one of her significant works in her career. She received praise and acclaim for portraying the title character for which she stayed near a brothel in Kolkata to study the body language of the prostitutes.

As a child, Mrunal Thakur developed an interest in acting and her parents were very supportive of her.

She got her major break in the television circuit with a role in the TV series, Mujhse Kuchh Kehti…Yeh Khamoshiyaan. She was still in college at that time.

She shot to fame for her role in the hit TV series, Kumkum Bhagya, alongside actress Sriti Jha.

In 2014, she appeared as a contestant in the reality show, Box Cricket League.

In 2015 She along with her ex-boyfriend Sharad Chandra Tripathi appeared in season seven of the reality show Nach Baliye. They were eliminated in week 7.

She portrayed Ira Sakhuja in the Netflix anthology horror movie Ghost Stories in 2020.