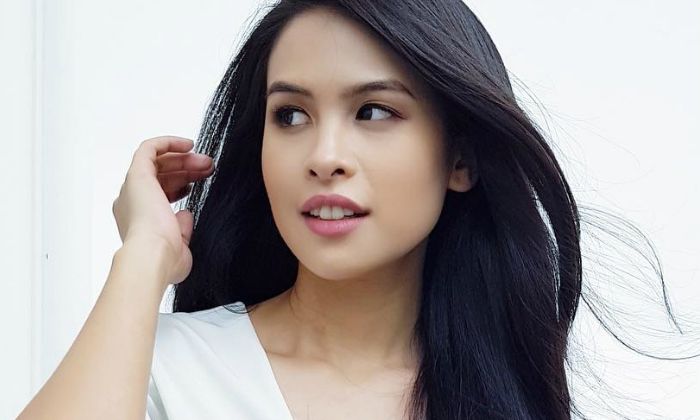 Maudy Ayunda is an Indonesian singer and actress probably best known for her chart-busting studio albums such as Panggil Aku… (Call Me…) (2011), Moments (2015), and Oxygen (2018). She played lead roles in a handful of Indonesian films including Untuk Rena, Malaikat Tanpa Sayap, Refrain, Perahu Kertas 2, Trinity The Nekad Traveler and Habibie & Ainun 3. In addition to her career as an actress and singer, Maudy has achieved a lot of fame as an activist in her home country who is actively involved in Social, Political, and Economic issues in Indonesia, especially modern slavery, forced labor, marriage, and dangerous labor.

Maudy Ayunda was born on the 19th of December 1994, in Jakarta, Indonesia. She is currently 27 years old.

Maudy Ayunda is the oldest of the two girls in her family. Her parents are Didit Jasmedi R. Irawan and Muren Murdjoko Jasmedi. She has a younger sister named Amanda Khairunnisa.

Ayunda attended and graduated from the British School of Jakarta in Pondok Aren, South Tangerang, Greater Jakarta, Indonesia. She then joined the University of Oxford in Oxford, England, and graduated with a degree in Philosophy, Politics, and Economics (PPE) in 2016.

She had decided to do her master’s degree at Stanford University in Stanford, California, United States.

In her last year of high school, Maudy applied and was accepted into Columbia University in New York City, New York, United States. However, she decided to take the year off to focus on other things and decided not to move to the United States.

Maudy Ayunda has been in a relationship with Arsyah Rasyid, an Indonesian CEO and co-founder of the multimedia company Kokatto, since 2015.

Ayunda released her debut studio album, Panggil Aku…, on August 11, 2011, on Trinity Optima Production. The album featured 10 beautiful songs that all are super hits in her home country.

Maudy Ayunda landed her first acting role as Rena in the 2005 Indonesian film, Untuk Rena, in which she starred alongside Surya Saputra.

As an actress and singer, Maudy Ayunda has endorsed a lot of local and international brands throughout her career which in turn have added great value to her net worth. Some of the brands that she promoted or endorsed through social media and by featuring in TV commercials include L’Oreal Paris, Pantene, Lux Maudy Ayunda, Vivo Smartphones, Windbreak, Good Day, Bukalapak, Coca-Cola, Indomie, Laurier, Chocomania, and many more.

Though Maudy’s exact net worth is certainly not known, several sources have claimed her to be worth over $1 million dollars.

Starting at the age of 11, Maudy Ayunda has appeared in over a dozen feature film productions and has achieved great success in the show business.

She is multilingual and is fluent in Indonesian, Mandarin, Spanish, and English.

Also an author, Maudy Ayunda has written and published books such as A Forest of Fables in 2005, a collection of children’s fairy tales, and #Dear Tomorrow: Notes to My Future Self in 2018, a philosophical, inspirational, and biographical book.

In 2015, Maudy was awarded the Lifestyle Award in Education at the I Fashion Festival for her efforts to promoted education and other social-economical factors.

Walt Disney Pictures picked Maudy to sing the soundtrack “How Far I’ll Go” from the Indonesian song “Seberapa Jauh Ku Melangkah” for the film Moana in 2016.

In 2017, BUBU Awards named her the “Best Digital Influencer” and the “Most Influential Millennial” at the Style Awards for her positive social media engagement and collaboration with CIMB Niaga on the “Kejar Mimpi” movement.

She was appointed a spokesperson against modern slavery at the Vice Presidential Palace in Jakarta in 2017.

In 2020, she was featured in Forbes’ “30 Under 30 Asia” list in the entertainment and sports category.