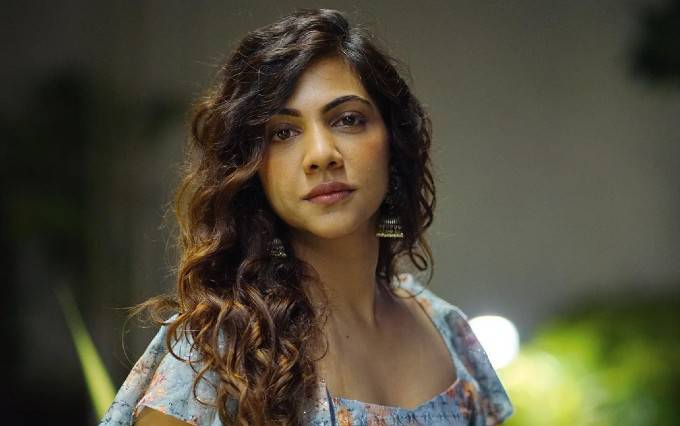 Madonna Sebastian is a well-known actress in the South Indian Film industry. Despite she has done only countable movies, she became the heartthrob of youngsters, thanks to her good looks, unquestionable talents, and captivating onscreen persona. Her film credits include Premam (2015), King Liar (2016), Pa Paandi (2017), Kavan (2017), Iblis (2018), Virus (2019), Brother’s Day (2019), and Shyam Singha Roy (2021). Check out Madonna Sebastian’s biography to know more about her childhood, film career, height, weight, affairs, boyfriend, net worth, salary, and lesser-known facts about her.

Madonna was born on the 19th of May 1992 in Kolenchery, Kochi, Kerala, India. She is currently 30 years old.

Madonna Sebastian is the daughter of Babycd Devasia and Shyla Babycd. She has an older sister named Michelle Sebastian.

Madonna did her early schooling in an Indian school in Salalah, Oman, and then moved to Kerala where she completed her higher secondary education at  St Peter’s Senior Secondary School, Kadayiruppu. She enrolled at Christ University in Bangalore where she obtained her bachelor’s degree in Commerce.

Even though Sebastian has been in the industry for a few years now, she has a clean profile without any romantic link-up with co-stars. She has not found her soulmate yet or might be good at keeping them off the eyes of the shutterbugs.

Madonna Sebastian made her acting debut with the 2015 Malayalam film, Premam as Celine George. Her performance in the film earned her a nomination at SIIMA Awards for Best Female Debut – Malayalam.

The following year, she made her Tamil debut with Kadhalum Kadandhu Pogum, alongside Vijay Sethupathi, which bagged her Vikatan Awards for Best Debut Heroine.

Madonna entered showbiz with the popular Malayalam musical program, Music Mojo which gained her fame and popularity amongst the audience.

Following the overwhelming success of her debuts in Malayalam and Telugu, Madonna Sebastian has doubled her salary, but the exact figure is unknown. Having acted only in a few films, the budding actress has a lot way more to reach. Likewise, Madonna’s net worth is unknown.

The striking beauty quickly became the household name of South Indians, thanks to her convincing onscreen persona. She enjoys a fan following as daunting as some of the big names in the entertainment industry. Follow her on:

Best known for her gorgeous smile and dazzling eyes, the dusky beauty looks charming in all kinds of attires.

Madonna aspired for a career in singing, and, in fact, she wasn’t interested in acting when Alphonse Putharen, director of Premam called in for the audition. She was shortlisted for the role of Mary. She insisted that she related more to Cecile’s character and thus was given to play Cecile.

Her parents wanted her to take up a career in civil services, but she knew that it was not for her.

In case you do not know, Madonna Sebastian is a trained Karnatic singer and also accomplished in western music.

If you think Premam was her first movie offer, then you are wrong. She has turned down 10 movie offers before landing an acclaimed role in Premam. And of course, credit goes to Alphonse for convincing her to be a part of the film.

She is an avid book lover, who enjoys spending time amidst pristine nature reading her favorite books.