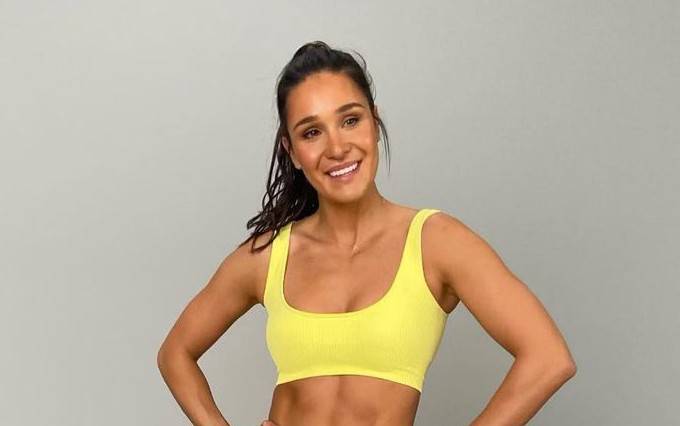 Kayla Itsines is an Australian fitness guru and entrepreneur who is probably best known for her fitness ebooks titled Bikini Body Guides, and a workout app called Sweat with Kayla. She is one of the most followed fitness trainers with Greek heritage and has more than 14.5 million followers on Instagram. In 2016, Time named Kayla as one of the 30 most influential people on the Internet.

Kayla Itsines was born on the 21st of May 1991, in Adelaide, South Australia, Australia. She is currently 31 years old.

As a teenager, she aspired to become a beauty therapist but eventually ended up with a career in health and fitness. She graduated as a Master Trainer from the Australian Institute of Fitness in 2008.

Itsines started dating her gym mate, Tobi Pearce, who was then studying a double-degree in Law and Commerce and also studying to be a personal trainer. They moved in together after their engagement in April 2018 and since then, they have been living together. She gave birth to a baby girl named Arna in May 2019. They ended their relationship on August 21, 2020.

With immense popularity on Instagram, this leggy lass is not only a fitness freak and so a businesswoman. She made use of her popularity on social media to promote her company, Bikini Body which she and her fiancee founded in March 2013. Following that, she has complied her routines into ebooks and also published bikini guides to help her clients possess a flawless body.

As of 2022, Kayla Itsines has an estimated net worth of $70 million US dollars that results from her company, personal training, and endorsement deals. She draws an annual salary of $8 million US dollars. Her net worth has skyrocketed in the last few years and along with her fiancee, has helped herself to create an empire of fortune for them. She does regularly tour major cities around the world under “Kayla Itsines Bootcamp World Tour” and “Kayla Itsines Sweat Tour” which adds up great value to her net worth. Obviously, she used her immense fan base on Instagram and other social media platforms to promote high-profile brands and products in her own strategic way by embedding them into her videos and posts.

With a whopping eight million-plus followers, Kayla’s Instagram account is known best for the amazing before-and-after pictures from her devoted followers.

Kayla is obsessed with dogs. She has two Siberian huskies, named Ace and Junior. Her former husky, TJ, passed in Feb 2017.

In 2011, she gave up her alcohol habits and also raises awareness amongst people that nobody pursuing a healthy lifestyle should either.

She loves playing basketball, which helps to rejuvenate herself from negative thoughts.

She is the author of a series of fitness eBooks named Bikini Body Guides and a meal-planning and workout app, Sweat and Kayla.

Her bikini guides have witnessed several million downloads ever since their release.

With an amazing fortune of $46 million, she made it to the BRW Young Rich List in 2016.