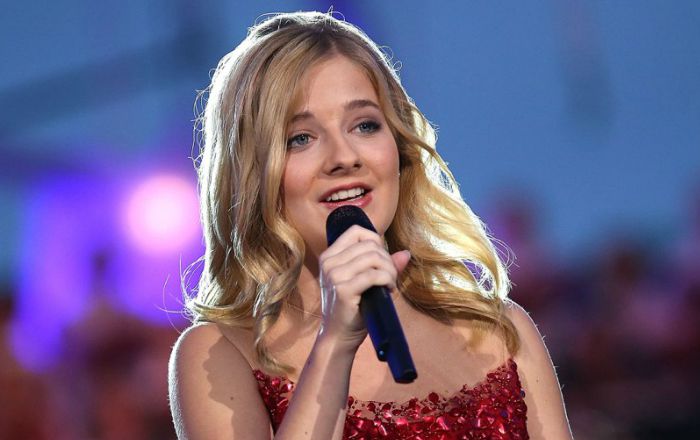 Of her seven studio albums, three were Billboard 200 top 10 debuts. She played Isabel in the 2013 political thriller film The Company You Keep, which was her first breakthrough appearance in a film. As of 2023, Jackie Evancho has a net worth of $4 million dollars.

Jackie Evancho was born on the 9th of April 2000, in Pittsburgh, Pennsylvania, United States of America. She is currently 22 years old.

Jackie is the daughter of Lisa Evancho and Michael Evancho, who ran a video security business until 2010. She has three siblings, an older transgender sister Juliet (born Jacob), a younger brother Zachary, and a younger sister Rachel. She is of Polish, Slovak, Ukrainian, German, and Italian descent.

Jackie is kind of a person who rarely opens up about his personal life and thus we could barely find any information related to her past or present relationships.

Jackie Evancho was just 9 years old when she released her independent album, “Prelude to a Dream”, on November 10, 2009. The album managed to sell over 4000 copies.

Her first credited work in singing was her debut EP, “O Holy Night”, which was released on November 16, 2010. It debuted at number 2 on the US Billboard 200 and went on to receive platinum as well as gold. With that, at age 10, Evancho was the youngest solo artist ever to debut in the top 10 on the Billboard 200, and the youngest solo artist ever to go platinum in the US.

Her official debut studio album, “Dream with Me”, was released on June 3, 2011, debuting at No. 2 on the Billboard 200 chart. With this, She became the youngest top-5 debut artist in UK history.

Evancho made her first film appearance as an extra in the 2010 film She’s Out of My League.

She earned her first big role in 2011, starring as Isabel Grant in a dram-thriller film, The Company You Keep.

Jackie Evancho first appeared as a contestant in the reality show America’s Got Talent in 2010. She entered the show after two unsuccessful auditions. She was announced runner-up of the show which brought her nationwide fame and recognition.

She has done endorsement work for King Orthodontics commercial, GUESS Kids, and Justice Girls Clothing. She has served as the ambassador for Mission: Humane.

She holds several records like being the youngest top-10 debut artist in U.S. history and the youngest solo artist ever to go platinum in the U.S.

In 2017, Evancho performed the U.S. national anthem at the presidential inauguration of Donald Trump and became the youngest person ever to perform a concert series at Café Carlyle.

Her last name is pronounced as “ee-VANK-oh.”

Evancho was the runner-up of season 5 of America’s Got Talent.

She has sung for Donald Trump, Barack Obama, and other leaders.

Evancho appeared on the National League of Junior Cotillions’ list of “Ten Best-Mannered People of 2011” for “demonstrating humility and politeness as a young performer.”

She loves to play piano and violin.

Evancho was the youngest person to be honored by the Senator John Heinz History Center at its 20th Annual History Makers Award Dinner as one of five “distinguished Pittsburghers … recognized for their exceptional contributions to the history of Western Pennsylvania, the nation, and the world” in 2012.

She has a dog named Maggie.

In 2020, she appeared in the singing reality show The Masked Singer as a contestant.