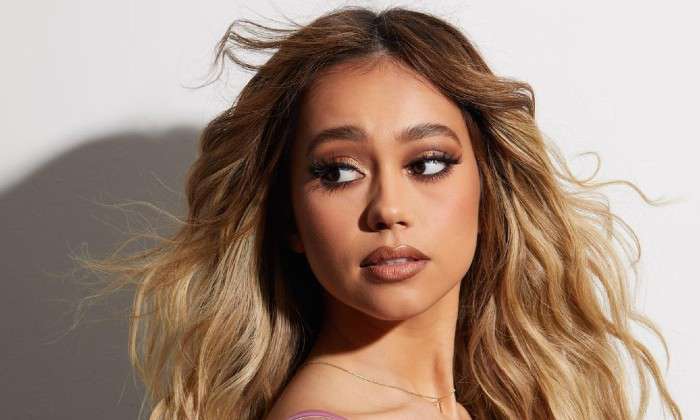 Instagram model and YouTuber, Ivanita Lomeli , who is in her early 20s has already garnered so much attention for herself, thanks to her relationship with YouTube star Lucas Dobre. Though she became famous for dating Lucas, Ivanita is now a budding star in her own right. With 5.2 million subscribers on her self-titled YouTube channel and 1.2 million followers on Instagram, the young blonde is all over our feed now. And, not to mention her 6.5 million TikTok fans, Ivanita is literally all over the internet. The duo help each other grow their online presence through video collabs as well as posting cute photos on both of their social media handles.

Ivanita Lomeli was born on the 25th of October 1997. in Virginia, United States of America. Originally from Tototlan, Jalisco, Mexico, her parents moved to the United States years before she was born. She has two siblings, an older brother and a younger sister named Sammi Lomeli.

Ivanita Lomeli has been in a relationship with fellow YouTuber and social media star Lucas Dobre since 2018. He’s one half of the YouTube channel, Lucas and Marcus, a channel with 24 million subscribers, which he run with his twin brother Marcus. They both have another channel called Dobre Brothers, where they have accumulated more than 10.5 million subscribers.

Ivanita Lomeli’s career really took off in 2018 when she was rumored to be dating Lucas Dobre, one-half of the Dobre twins. At that time, Lucas was already a familiar face on the internet with over 11 million subscribers on their channel, Lucas and Marcus. Just like her, he was also a dancer and he rose to fame by displaying his dancing talents on the now-defunct Vine app.

They started out as friends and eventually fell for each other. In February, she asked him to be her Valentine and they made their romance public the following month. It’s no surprise that she jumped onto the social media bandwagon where she has now over millions of fans across social media.

She posted her first video on YouTube on July 4, 2018. It was was actually a prank video where she makes pranks on Lucas and Marcus. That video has garnered over 23 million views since then. From there, she shows no signs of stopping anytime soon and has attracted an audience of over 5.2 million subscribers on her channel.

Ivanita has since branched out to other social media platforms. She has over 1.2 million followers on Instagram and 6.5 million fans on TikTok. Now that she is a successful social media star with a massive following across social media and it’s no surprise that she earns huge checks for each and every collab with brands.

At such a young age, she has successfully made a career for herself on social media and has proven that success is possible for young women around the world. She is a force to be reckoned with as well as serves as an admirable role model for people all over the world, especially young women.

In January 2019, She gifted herself a Mercedes Benz GLC AMG 63s Coupe, which is her dream car.

That September, she gifted her mom her dream car.

If she wanted to do a collab with a celebrity, that would be Ariana Grande.

She loves dancing and singing.

Her favorite quote is “Not everyone believes in her and not everyone supports her, but God goes with her and that’s what sustains her.”