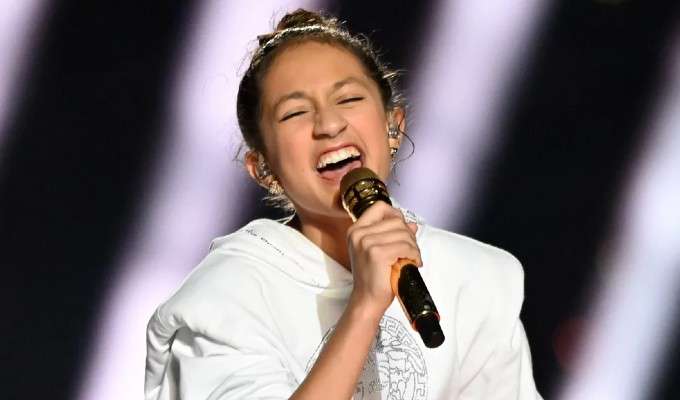 Emme Maribel Muñiz is an aspiring singer and the daughter of pop icon Jennifer Lopez and her ex-husband Marc Anthony. She caught the spotlight last year when she made an eye-popping performance alongside her mother at the Super Bowl halftime show. The 13-year-old singer has already garnered so much attention for herself, thanks to her amazing vocal skills.

There’s no doubt that she’s going to make it big in the pop industry and she has already shown the world what she’s capable of. She appeared in a music video for Limitless from the film Second Act in 2018 and joined her mother on tour in 2019 to sing the track on stage. She has a twin brother, Maximilian Muniz, who is also talented in his own right.

She’s got multiple roots, including Puerto Rican, Spanish, and Taíno.

Emme is the daughter of singers Marc Anthony and Jennifer Lopez. She has a twin brother named Maximilian David Muñiz. In addition to her biological brother, she has four half-siblings: Arianna, Chase, Cristian, and Ryan,

She divides her time between New York City and Los Angeles.

Given the fact that Khia is barely 13-years-old, it’s highly unlikely that she’s entered the world of dating. While she’s busy with her academics and building her career as a singer, the chances of her having a boyfriend are slim at best.

She stole the show when she performed her mother’s song “Let’s Get Loud” at the Super Bowl halftime show.

She is 11 minutes older than her twin brother.

She was named after Dragon Tales character, Emmy.

Her middle name, Maribel was named after her aunt, Maribel.

Emme has been singing ever since she began to talk.

Her parents divorced in June 2014 when she was 6 years old.

People magazine bought the first photos of Emme and her twin brother Maximilian for a reported $6 million. They published their photos on their cover.

At age 11, she sang the cover of Alicia Keyes’ If I Ain’t Got You, and her mother shared the video on her social media pages.

She published her book titled “Lord Help Me” in May 2020.