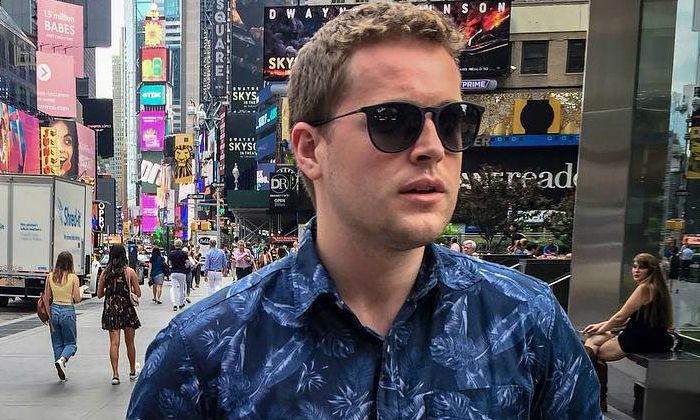 DJ Blitz is a Canadian Radio Host and DJ from Winnipeg, Manitoba. He has opened for some of the biggest artists in the creative industry including Lil Jon, and he was selected as one of the DJs for Rihanna’s VIP party at her 2016 concert @ Bell MTS Place. He was listed on klear.com as one of the top 10 social media influencers in Winnipeg and was voted as runner-up for “Favourite Local DJ” in The Uniter in 2018. DJ Blitz has also been nominated for several Winnipeg Nightlife Awards such as “DJ of The Year” and “Best Social Media Presence”.

DJ Blitz has had the pleasure of interviewing several celebrities including Lights, Portugal. The Man, Chantel Jeffries, Scott Helman, and Felix Cartal. He has hosted a number of events around his city and province and enjoys pumping up a crowd and bringing energy to a variety of events. In 2018, he signed with Bell Media and accepted the position of Weekend Host on 103.1 Virgin Radio (Winnipeg’s 1 Hit Music Station), which airs 12-6 pm on Saturdays and Sundays. The show broadcasts in Manitoba to hundreds of thousands and also across Canada through the iHeart Radio App.

DJ Blitz was born on the 5th of March 1994, in Winnipeg, Manitoba, Canada. He is currently 28 years old.

There’s not a lot to share regarding his personal matters including his parents’ name and their profession and his siblings. He has not talked much about his childhood either.

He attended Ecole Marie-Anne Gaboury, College Jeanne-Sauve, and Dakota Collegiate. DJ Blitz had a passion for sports from an early age, especially volleyball and basketball.

Once he graduated from high school in 2012, DJ Blitz took a year of general arts at the University of Manitoba before transferring over to the University of Winnipeg to pursue a degree in Business. He graduated in 2017 with a 5 year Bachelor of Business Administration degree, with a major in HR and Marketing

Now, this is the topic that most of you are probably looking forward to. Well, he’s in a relationship with Chrissy Goodman and you can find a lot of pictures of himself with his girlfriend on his Instagram. The two have been dating for over a year now and are still going strong.

DJ Blitz developed an interest in mixing music during his time at the university and became a self-taught DJ. He started his career as a DJ working at weddings and socials, then worked his way up into many of the most popular clubs in the city. His mixes were featured on commercial radio and became popular with radio listeners.

As soon as he began working in radio, the combination of both social media and radio led him to many opportunities in Manitoba, including invitations to host a variety of events in the city and province. In 2019, DJ Blitz received an intriguing message on Twitter, asking how many retweets it would take for him to DJ a wedding for free.

Blitz’s response was 250K, and the screenshot was posted online. It went viral worldwide. The tweet reached more than 400K retweets on Twitter and is currently is one of the most retweeted Tweets in history. In 2020, Blitz accepted a weekly Saturday night residency at 441 Main in Downtown Winnipeg, one of the most popular clubs in the city of Winnipeg. Blitz is both the host and DJ for the night.

In addition to being a passionate DJ, Blitz is also an accomplished radio host. He has accumulated over 93,400 followers to his @djblitzwpg Twitter account. You can catch him on the same handle on Instagram and Facebook, where he’s earned over 36,000 and 47,000 followers, respectively.

On TikTik, he can be found as @djblitzwpg, which already has over 19,000 followers. You can also follow him on the same handle on Snapchat as well.

Blitz worked at the Winnipeg Goldeyes Baseball Club as a teenager and frequently put on dance performances with the team’s mascot Goldie.

The JV “Athlete Of The Year” award was given to DJ Blitz while he was in grade 10.

While attending Dakota Collegiate, DJ Blitz was voted “Most Likely to Become a YouTube Sensation.”

He is related to Henry SeptimusBeddome who was said to be Louis Riel’s doctor and friend.

DJ Blitz’s play of choice when playing Madden 2006 with his brother was often a “Blitz” by a linebacker. When sacking the quarterback multiple times, his brother would often shout “UGH. BLITZ! BLITZ!” in anger. That is where the stage name originated.