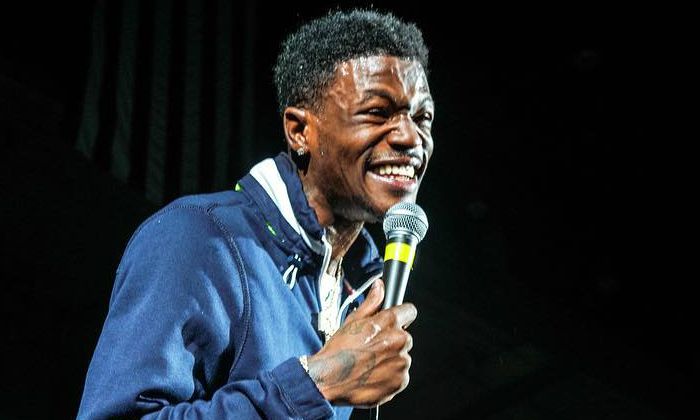 DC Young Fly is an Atlanta based entertainer, rapper, comedian, actor and internet star. After gaining initial traction for his hilarious videos on the now-defunct social media app Vine, DC catapulted to fame as a recurring cast member on MTV’s sketch comedy series Wild ‘N Out. He is also one of the main hosts of MTV’s TRL.

His abundant creativity and comedic ability were clearly evident in his comedy videos and shows. On the rapping front, DC’s credits include “Westside Connection,” “M.A.P. feat. Money Bag,” “Right Now,” and “No Weed”. DC has also starred in ‘Almost Christmas,’ ‘#DigitalLivesMatter,’ ‘Hollywood Hearts’ and ‘How High 2’. As of 2022, DC Young Fly’s net worth is estimated to be $3 million.

DcYoungFly was born as John Whitfield on the 2nd of May 1992, in Atlanta, Georgia, United States of America. He is currently 30 years old.

Well, there’s not much-known information about John Whitfield’s family and childhood. He was born the youngest of seven children to African-American parents, however, their identities are unknown. If you’re a regular viewer of his YouTube videos, you may have spotted his mother in a few of the videos.

DC Young Fly has been dating actress and entrepreneur Ms. Jacky Oh since 2015, who was also his co-star on Wild ‘N Out. They have a daughter together named Nova, born on October 30, 2016. His girlfriend owns a line of makeup products.

DC Young Fly made his onscreen debut as Eric in the comedy film ‘Almost Christmas’ in 2016.

DC had his first appearance on television in the comedy series Wild ‘N Out, in which he appeared as a recurring cast in 2015.

As a rapper and singer, DC Young Fly has released a host of tracks, starting with “Westside Connection” on September 16, 2014.

He is a huge fan of DC comics and because of that, he got his nickname.

His parents divorced when he was six years old.

DC’s early life can be described as notorious and problematic. He began shooting dice, a gambling game at age 12, sold weed at 15 and sold crack at 17.

His father died due to Alzheimer’s disease in 2013.

In 2014, he gifted his mother a new Mercedes-Benz car, which he filmed and uploaded to his YouTube channel.

In June 2010, his close friend named Richie whom he considered as his brother was killed in a mishap. He was a part of his “Da Crew” rap organization. After his death, he got the words “DC” tattooed on his forehead as a tribute to him.

DC had served a jail term of 31 days in May 2015 and pledged he would never go back.

In 2014, DC made a roasting video on Kevin Hart that led to a feud between the two. They both exchanged heated arguments on Instagram and it had only catapulted DC Young Fly to the next level of fame.

In February 2019, he and fellow entertainer Jess Hilarious co-hosted the 2019 BET Social Awards.

DC starred alongside rapper Lil Yachty in the 2019 sequel, How High, which premiered on MTV on April 20, 2019.