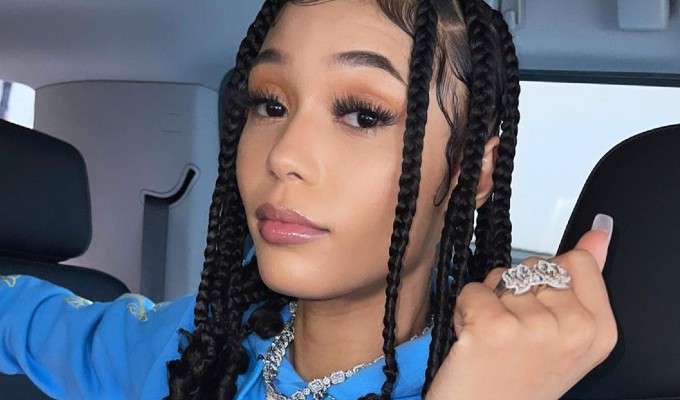 Coi Leray is an American rapper and singer from Boston, Massachusetts. She burst into the hip-hop scene in 2018 with the release of her debut single “Huddy”. Three years later, she achieved mainstream success with “No More Parties,” the lead single off her debut album. It became her first song to debut on the Billboard Hot 100 singles chart, peaking at number 26 as well as earning platinum certification from the Recording Industry Association of America (RIAA). Leray dropped her debut studio album, Trendsetter, in 2022.

The budding artist behind hit singles “G.A.N” and “Pac Girl” dropped out of high school to pursue music. She continues to impress the audience with her soulful renditions and has amassed a massive following of 6.1 million followers on Instagram.

She is of Puerto Rican and Cape Verdean descent.

Coi Leray is the daughter of music producer and hip-hop executive Raymond Scott aka Benzino, She has five brothers including Kwame and Taj.

Leray developed an early interest in music and dropped out of school when she was 16 years old. At age 17, she moved out of the house and started to live on her own. She worked as a salesgirl before embarking on a music career.

In 2021, Leray was awarded an honorary diploma by Montclair High School in Montclair, New Jersey.

Known for her smash hit tracks “No More Parties” and “Big Purr (Prrdd),” the lead singles from her debut album which is slated to arrive anytime soon. The songs peaked at number 26 and number 69 on the Billboard Hot 100 chart.

Thanks to her talent and popularity, Coi Leray has an estimated net worth of $200 thousand, as of 2022.

Her parents divorced when she was a kid and was raised by her mother.

The rapper dropped her viral hit song “No More Parties” in January 2021. Followed it up with a television appearance on The Tonight Show, marking her debut on television, she performed the song on the show. The remix version of the song was later released on YouTube featuring Lil Durk.

She recorded a remix of Gunna and Young Thug’s “King Kong.”

Coi has worked as a featured artist on various songs including “Freaky Deaky”, “Tomboy”, and “Gimmy Licky”.

In 2021, she received multiple nominations at the BET Awards and BET Hip Hop Awards, including the Best New Hip hop Artist.

She released her debut studio album, Trendsetter, on April 8, 2022, which peaked at number 89 on the US Billboard 200. The album contains 20 songs featuring artists like Yung Bleu, Fivio Foreign, Young M.A, G Herbo, H.E.R., Nav, Polo G, Lil Tecca, and A Boogie wit da Hoodie, among others.