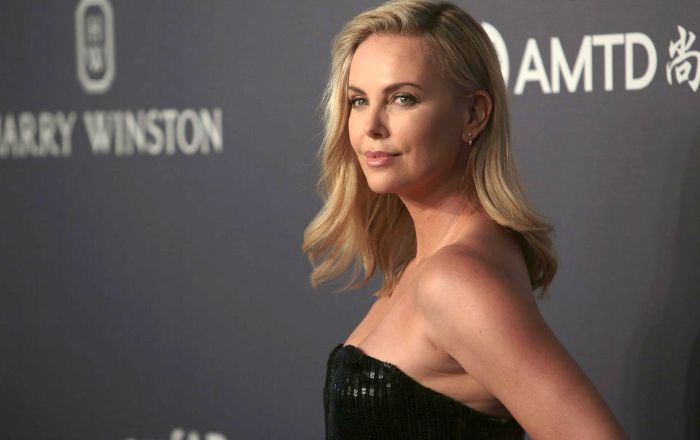 Charlize Theron is a South African-born American actress and film producer who gained global fame and recognition for her starring roles in such movies as The Devil’s Advocate, Monster, Young Adult and Tully, among other acting credits. As of 2019, Charlize Theron has an estimated net worth of $130 million.

Born in Benoni, South Africa on August 7, 1975, Charlize spent most of her childhood in her parent’s farm. She attended National School of the Arts. Coming from Afrikaner family background, she has Dutch, French and German roots. Apparently, she is fluent in both English and Afrikaans.

In spite of her wanting to become a dancer, Charlize Theron began modeling after she won a one-year modeling contract at a local modeling competition at age 16. She moved to Milan, Italy with her mother and traveled throughout Europe modeling for one year.

She returned to New York City where she enrolled at the Joffrey Ballet School to study ballet. But apparently, her dancing career ended following a knee injury.

Charlize Theron got her start in acting after a talent agent discovered her at a bank and introduced her to casting agents. She, eventually, made her debut in the horror film Children of the Corn III: Urban Harvest in 1995.

Her breakout role came after two years in 2007 when she played the role of Mary Ann Lomax in the thriller, ‘The Devil’s Advocate’, alongside Al Pacino and Keanu Reeves. After starring in a string of Hollywood’s most successful movies, her career propelled, enlisting her in the A-list of Hollywood actors.

In 2003, she starred in the biographical crime film, ‘Monster’, playing the role of a serial killer named Aileen Wuornos. She won her first Academy Awards for her work in addition to many prestigious awards.

In an acting career spanning more than 25 years, Charlize Theron has appeared in a number of critically acclaimed movies. Some of her most remarkable movies are Tully, Young Adult, Mad Max: Fury Road, North Country, The Life and Death of Peter Sellers, and Long Shot.

Apart from acting, Charlize earns a lot of money from brand endorsements, and various business ventures. She earned around $55 million for being the face of Jádore perfume.

Charlize Theron owns several properties in the US and South Africa and lives in a luxury house located in Outpost Estates neighborhood, Hollywood Hills, Los Angeles. Her Beverly house is valued at $11 million that boasts spacious rooms, bathrooms and is equipped with a swimming pool, tennis court, jacuzzi, gym, bar, and other amenities. She owns a Lexus RX400h and a Range Rover.

As of 2019, Charlize Theron’s net worth is estimated to be $130 Million dollars.