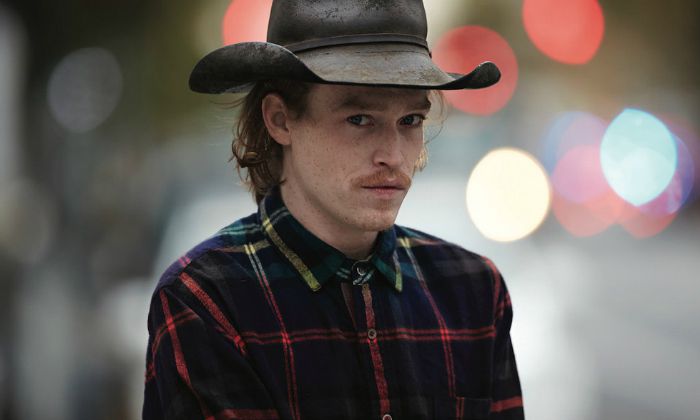 Caleb Landry Jones is an American actor and musician, perhaps best known for his supporting character in films such X-Men: First Class as Banshee, Get Out as Jeremy Armitage, and Three Billboards Outside Ebbing, Missouri as Red Welby. Also an exceptional singer, he originally started his career as a musician for the folk-rock band called Robert Jones along with Robert Hudson. They digitally released their debut studio album ‘Men and Their Horses’ in 2009. He dropped his first solo studio album, The Mother Stone, on May 1, 2020

Caleb Landry Jones was born on the 7th of December 1989, in Garland, Texas, United States. He is currently 32 years old.

Caleb is the son of farm owners Cindy and Patrick Jones. His family relocated to Richardson, a suburb in Dallas when Caleb was a small child. He was raised up in Richardson.

Caleb studied at Richardson High School. In school, she appeared in a number of school productions, however, he stated that he never really got to play big roles. He also attended the University of Oklahoma and the University of Missouri School of Law.

The Texas native is a private person and hasn’t dated anyone publicly. He makes sure to keep his personal life away from the shutterbugs and thus there are not many known details about his love life or past relationships.

Caleb Landry Jones was just 16 when he landed a role in the Oscar-nominated neo-western crime thriller film, No Country for Old Men in 2007. This was his first-ever appearance in any film, in which, he played the role of a teenage guy who stumble upon an injured Javier Bardem towards the end of the film. He was credited as Caleb Jones in the film.

Caleb got his first major break in 2011 when he was cast in a supporting role of Sean Cassidy / Banshee in the superhero film, X-Men: First Class. He was nominated for Teen Choice Award for Movie Chemistry along with other casts of the film, Edi Gathegi, Nicholas Hoult, Zöe Kravitz, Jennifer Lawrence, and Lucas Till.

He played Jeremy in “ Out”, a 2017 satirical horror film directed by Jordan Peele. Caleb received appreciation for his performance in the film, which earned him a National Board of Review Award for Best Cast. He was also nominated for San Diego Film Critics Society Award and Screen Actors Guild Award. Apparently, this was work in his acting career.

Caleb has been in the acting scene since 2007 and all of his efforts have helped him to put his net worth to $4 million.

Caleb’s professional career took off when he formed an experimental folk-rock band entitled “Robert Jones” with friends Robert Hudson and AJ Durham. He was a drummer and lead vocalist of the band.

After the group released their debut album, they went on hiatus, and in meantime, he got opportunities in movies. Thereafter, he started focusing on his acting career.

He was featured on several episodes of the TV series Friday Night Lights.

He and actor Nicholas Hoult both share their birthday.

His favorite quote on success is, “You have reached the pinnacle of success as soon as you become uninterested in money, compliments, and publicity” by Tom Wolfe.