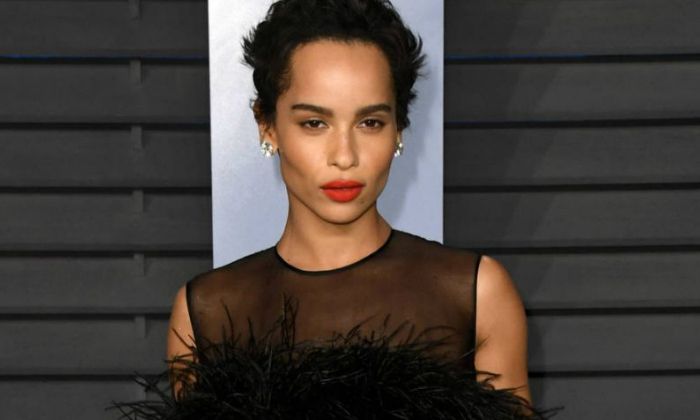 Who is Zoe Kravitz?

Zoë Kravitz is an American actress and singer who gained enormous fame for her role as Angel Salvadore in the 2011 superhero film, X-Men: First Class. She went to portray her character as Christina in Divergent film series and Toast the Knowing in Mad Max: Fury Road. She played Leta Lestrange in the Harry Potter spin-off film, Fantastic Beasts and Where to Find Them and reprised her role in Fantastic Beasts: The Crimes of Grindelwald. Kravitz has been cast as Bonnie Carlson in the HBO drama series Big Little Lies since 2017. Also a voice artist, she lent her voice to the characters, Catwoman and Mary Jane Watson in the movies, The Lego Batman Movie, Spider-Man: Into the Spider-Verse, respectively.

Zoe Kravitz was born on December 1, 1988, in Los Angeles, California, USA. She is currently 30 years old.

Zoe Kravitz hails from a family renowned artists, where her father,
Lenny Kravitz, is a famous musician and her mother, Lisa Bonet is a Hollywood actress. Her parents need no introduction because of their accomplishments in their respective field of work. She has two younger half-siblings: half-sister, Lola Iolani Momoa, and half-brother, Nakoa-Wolf Manakauapo Namakaeha Momoa, from her mother’s remarriage to actor Jason Momoa. Her parents lived together for about six years after their marriage and divorced in 1993 when she was five years old.

Kravitz studied at the Miami Country Day School and graduated from Rudolf Steiner School in Manhattan, New York in 2007. She was admitted into the acting conservatory at the State University of New York at Purchase, but she dropped out after a year to focus on her acting career.

Talking about relationships, Zoe Kravitz is dating actor Karl Glusman of Nocturnal Animals fame since 2016. They both got engaged in February 2018, which she revealed during an interview with Rolling Stone on November 2018.

The Kin actress had dated many men at different stages of her life. Her first known relationship was with actor Ben Foster and the two dated for over a year between 2007 and 2008. She was romantically linked up with her co-star, Ezra Miller in 2010. She shared a screen space with the actor in the 2010 movie Beware the Gonzo.

That same year, rumors sparked out that Kravitz and German actor Michael Fassbender are romantically close together during the filming of X-Men: First Class. But, neither of them confirmed nor denied the claim. She then dated Gossip Girl actor, Penn Badgley, from 2011 until 2013 and had an encounter with actor Chris Pine. She also dated Asap Rocky in February 2015.

Zoe made her acting debut with the 2007 American romantic comedy-drama film, No Reservations. She was in high school when she was cast in the role of a babysitter named Charlotte, hired by Catherine Zeta-Jones’ character in the film.

In 2011, Zoe landed her first television role as Pearl in the American dramedy TV series, Californication. She appeared in 8 episodes of the series.

Zoe launched her singing career at the age of 16. She is the lead vocalist of this New York/ Philadelphia-based band, Elevator Figh, formed in 2009. she formed her own band called Lolawolf which was made up of members of the band Reputante. The band was named after Kravitz’ younger siblings, Lola and Nakoa-Wolf. As a part of the band, they released an eponymous EP in November 2013. They released their debut album, Calm Down, on October 21, 2014. The band released the five-track EP, Every Fuckin Day, on June 23, 2015.

Zoe got her first major break in 2011 when she was cast in the American coming-of-age film, Yelling to the Sky. It was her first lead role in the Victoria Mahoney directed film which had its premiere at the 61st Berlin International Film Festival. For her role as a high school student Sweetness O’Hara, she was nominated for Golden Bear Award.

Zoe Kravitz has a net worth of $8 million. She lives in an exotic house in Williamsburg, Brooklyn.

Zoe’s parents divorced when she was five years. She lived with her mother until she was eleven years old and then moved to Miami to live with her father, spending summers with her mother.

Actresses Marisa Tomei and Cree Summer are her godmothers

She began her acting career when she was still a senior in high school in 2007. That year, she did two films, Scott Hicks’ No Reservations and Neil Jordan’s The Brave One.

In 2013, she launched her own range of jewelries with Swarovski.

Zoe is fond of tattoos and she got her first tattoo at the age of 18.

She is best friends with actress Olivia Thirlby.

In 2017 Kravitz began playing the role of Bonnie, a laid back, yoga instructor who is the second wife of Madeline Mackenzie’s ex-husband in HBO’s miniseries Big Little Lies.

She was featured in Alexander Wang’s T 2010 fall ad campaign.

As a singer, her band Lolawolf has toured with Lily Allen and Miley Cyrus.

Zoe and her father, Lenny Kravitz, have both appeared in a film with Jennifer Lawrence, X-Men: First Class in 2011.