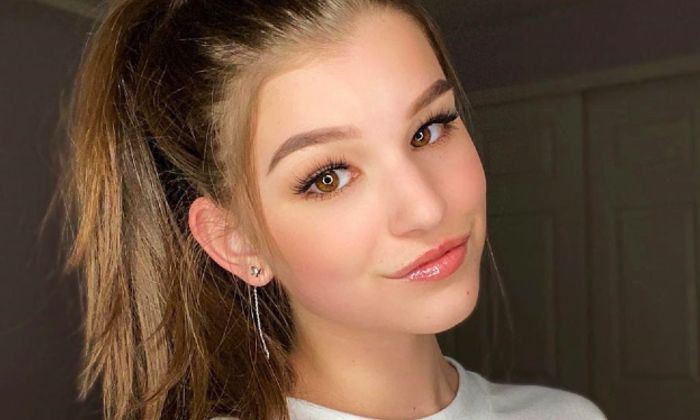 At just 18 years old, Brooke Monk has already garnered much attention for herself as a content creator from millennials all over the world. Born and bred in Jacksonville, Florida, Brooke’s early claim to fame is the lip-syncs and funny videos she shares on her @brookemonk_ TikTok account, which has amassed over 19 million followers. She has done collaboration videos with fellow TikTokers. Brooke is very religious. With the internet offering a lot of opportunities for content creators, Brooke has taken full advantage of it. She’s also on YouTube, with over 1.1 million people subscribed to her self-titled channel, to which she mostly uploads makeup and beauty videos.

Brooke Monk was born on the 31st of January 2003, in Jacksonville, Florida, United States of America. She’s currently 18 years old.

There’s not much to share regarding her family and early life. She has kept every aspect of her personal life including her parents, their names and profession, her education, and her early life.

She was raised by her mother, Amy Monk, alongside her five siblings Brynna, Blaize, Breanne, Brett, and Audra. From an early age, she has been obsessed with makeup and beautiful things. She’s being homeschooled.

Brooke is very open when it comes to her love life. She has been in a relationship with fellow social media personality Sam Dezz since October 2020. She often features him on her Instagram.

Like several other online influencers out there, Brooke Monk started doing TikTok as a hobby as well as to keep her busy and entertained. She started with posting lip-sync videos to the likes of popular songs, and later on, she began to explore different genres like dance, duets, pranks, challenges, and many more.

As her lip-syncing videos started earning tens of thousands of likes and views, it took only a few weeks for her to reach the milestone of one million followers. Five months into TikToking, she had accrued over 3 million followers. As of January 2021, Brooke’s attracted an audience of over 19 million followers, all thanks to her cute expressions and infectious smile.

Brooke Monk jumped on the YouTube bandwagon in July of 2019. She rarely uploads videos to her channel, and at the time of writing, her channel features only six videos. Despite being inconsistent, Brooke has managed to gain nearly 1.1 million subscribers, all thanks to her popularity on TikTok.

In a Q&A video she uploaded to her YouTube channel in November of 2019, she answered a few common questions that her fans wanted to know. She has an impressive 2.1 million followers on her Instagram account, where you can find a lot of adorable pictures of hers.