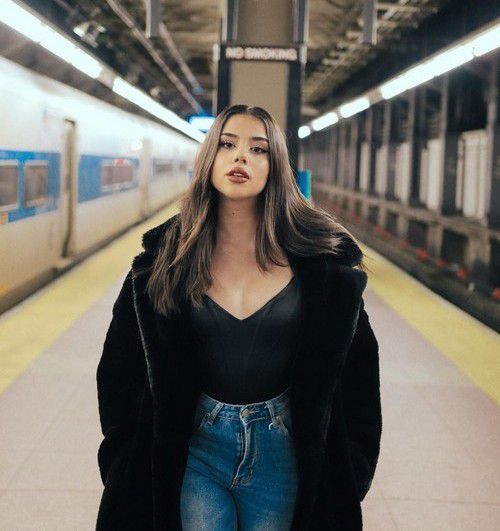 Amanda Diaz is a Cuban YouTuber and social media star. With over 700k subscribers on her eponymous YouTube channel, she shares content related to beauty, fashion, vlogs, and makeup. She has also amassed a huge following on Instagram with nearly one million followers.

Amanda Diaz was born on the 17th of November 2000, in Cuba. Despite being a popular name in the internet community, there’s not much known about her parents and family. It appears that she has taken great efforts to keep the personal aspect of her life under wraps.

Diaz’s family moved to the United States when she was a small girl. She now spends her time between Miami, Florida, and Los Angeles, California.

Amanda Diaz loves to keep her romantic aspect of life as secret as possible. She hasn’t disclosed anything about her love life or dating history to the media.

She dated a guy named Joey Chavez for a while in early 2019.

Unsurprisingly, Amanda Diaz just like other YouTube stars out there has made a career for herself by sharing her passion for what she loves with the ever-growing internet community. She joined YouTube in July 2014, however, it took almost two years for her to get her first video on the channel. She uploaded her first video titled Huge Haul! (Sephora, Colourpop, LuLu’s, etc.) on May 23, 2016,

From there, she continued to upload more videos to her channel that covers various lifestyle topics like beauty, makeup, fashion, book, music, travel, and much more. She uploads new videos twice a week every Wednesday and Sunday. The channel has since garnered more than 700 thousand subscribers.

Furthermore, she’s also an Instagram model. She is never afraid to show off her enviable body in provocative outfits to her nearly 1 million followers.

It’s obvious that social media stars make a lot of money through YouTube ad revenue, endorsement, and sponsored posts. YouTubers make an average of $5 to $10 for every 1000 monetized videos after YouTube takes their cut. Though it’s just an estimate, Amanda Diaz’s net worth is likely to be in a bracket of $100k to $500k.

Inspired by Kylie Jenner, she posted a makeup tutorial to her channel. The video has since been seen over 640 thousand times.

Her most popular YouTube video is “Everyday Natural Fall Makeup Tutorial by Amanda Diaz,” which is not only her most viewed video on her channel but also her first video effort to reach a million.

Diaz is also available on the short video-sharing app, TikTok. On the platform, she has attracted an audience of over 2.5 million fans and 30 million likes.