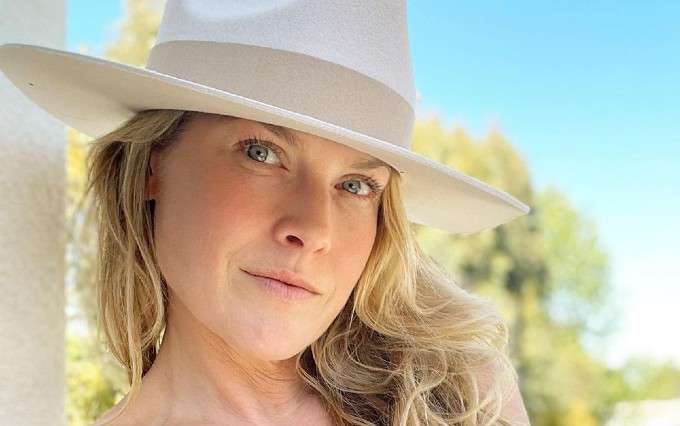 Ali Larter is an American model and actress who has been in showbiz since the age of 13. She caught the spotlight after starring in the film Final Destination and its sequel Final Destination 2. Before she got into acting, she was a model, appeared in various campaigns, and became well-known for portraying fictional actress Allegra Coleman in an Esquire magazine hoax.

Larter made her big-screen debut in Varsity Blues (1999). Since then, the actress has starred in a number of movies and TV shows, some of her notable works being Heroes, Legally Blonde, A Lot Like Love, Marigold, Obsessed, and Resident Evil: film series. Throughout her career, she has been on the covers of several renowned magazines like Cosmopolitan, Glamour, Maxim, Esquire, and Allure, among others. She’s married to comedian and actor Hayes MacArthur, with whom she has two children.

She is of English, Irish, and more distant Scottish, Welsh, and French-Canadian, descent.

Ali’s parents are Margaret, a realtor, and Danforth Larter, a trucking executive. She grew up alongside her sister in the Philadelphia suburb of Cherry Hill, New Jersey. There she went to Carusi Middle School and later attended Cherry Hill High School West.

Ali Larter met actor Hayes MacArthur on the sets of the film Homo Erectus, and they soon became friends. Not so long after that, they began dating each other and became engaged in December 2007. They got married on August 1, 2009. They have two children together, a son, Theodore Hayes MacArthur, born on December 20, 2010, and a girl named Vivienne Margaret, born on January 15, 2015.

Ali Larter got her start in showbiz when she was around 14 years old after she was discovered by a modeling scout. She signed with Ford Modeling Agency in New York and appeared in a ton of commercials and print ads. During one of her modeling gigs, she met actress Amy Smart while she was in Italy for a shoot and they soon became close friends. They even shared an apartment together while taking acting classes in Los Angeles.

Ali earned her first acting credit in 1997 when she guest-starred in an episode of the TV series Suddenly Susan. She followed it up with small roles in TV series and got her major breakthrough on the big screen when she landed the role of Darcy Sears in the 1999 film Varsity Blues.

The following year, she was cast in the hit movie Final Destination as Clear Rivers, for which she won the Young Hollywood Award for Breakthrough Performance Female. She reprised her role in Final Destination 2 as well. In 2006, she played the lead role of Niki Sanders in the NBC science fiction drama television series Heroes, a role that she portrayed until 2010, earning various nominations and winning a Teen Choice Award.

Larter has been part of major TV shows such as Legends, Pitch, The Rookie, as well as starred in movies like Obsessed, Marigold, and Resident Evil film series, in which she played the video game character, Claire Redfield.

As of 2023, Ali Larter has a net worth of $10 million, which she earned through her appearances in both films and TV shows. She has garnered a lot of fame and has constantly been in the spotlight throughout her career, thanks to the efforts she put in when she was young. Her impressive wealth is due to the continued success she has had in the show business.

She was raised in her hometown of Cherry Hill, New Jersey.

She began modeling at the age of 14 after being discovered by a modeling scout while she was walking on the street. Her first modeling job was the Phillies commercial.

She has graced the covers of several magazines, including Shape, Cosmopolitan, Allure, Glamour, Lucky, InStyle, Maxim, and Entertainment Weekly.

People magazine included her in their “Ten Best Dressed List” as “The Newcomer” in 2007.

In 2009, Larter was named Cosmopolitan magazine’s Fun Fearless Female of the year at a ceremony held in Beverly Hills.

In September 2013, Larter released her cookbook, Kitchen Revelry: A Year of Festive Menus from My Home to Yours.

Maxim once placed her at #2 in ther “Hottest Women of Horror Movies” list.