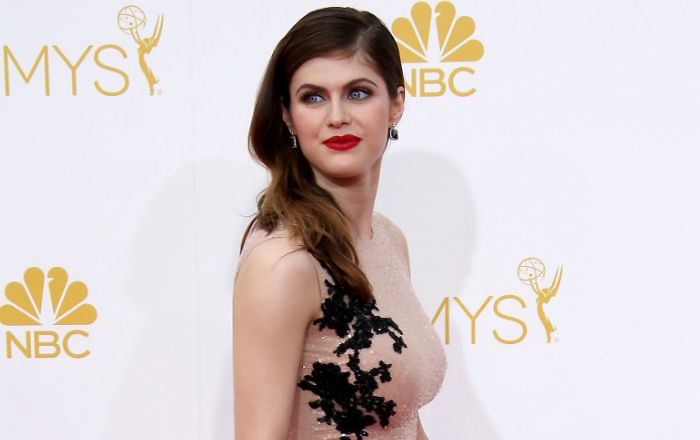 Alexandra Daddario is an American actress, who started her career in television playing Laurie Lewis in the soap opera ‘All My Children’ and rose to fame after appearing in the Percy Jackson film series. She starred alongside Dwayne Johnson in ‘San Andreas’, and also portrayed the role of Summer Quinn in ‘Baywatch’. Her other acting credits include ‘Texas Chainsaw 3D’, ‘American Horror Story’, ‘When We First Met’, and ‘We Have Always Lived in the Castle’.

Alexandra Daddario was born on the 16th of March 1986, in New York City, New York, United States of America. She is currently 36 years old.

Alexandra attended Brearley School, an all-girls private school, in New York City. She then attended Professional Children’s School and graduated from Marymount Manhattan College. She also studied the Meisner acting technique since she was a teen.

Daddario is romantically linked up with producer Andrew Form. They became engaged in December 2021.

She was rumored to be in a relationship with her Baywatch co-star Zac Efron in 2017. However, they neither accepted nor denied their relationship status.

She had previously dated her co-star Logan Lerman during the filming of Percy Jackson. They split in August 2015.

Alexandra Daddario landed a minor role in Noah Baumbach’s comedy-drama film, ‘The Squid and the Whale’ in 2005.

Her first leading role in a film came in 2010 when she portrayed the role of Annabeth Chase in the fantasy adventure film ‘Percy Jackson & the Olympians: The Lightning Thief’.

Daddario made her television debut in 2002 when she was cast to play the role of a victimized teen Laurie Lewis in the ABC daytime soap opera ‘All My Children’.

Her role as Laurie Lewis on ABC’s ‘All My Children’ was considered her longest appearance on television, in which she played in a total of 43 episodes from 2002 until 2003. This role was one of the significant roles in her acting career that brought her a lot of fame and created a niche for herself in the entertainment industry.

As of 2023, Alexandra Daddario has a net worth of $8 million dollars. She resides in a swanky house in Los Angeles, California. She owns a BMW.

Daddario started her acting career at the age of 16 in the ABC daytime soap opera ‘All My Children’.

She has a dog, named Levon.

Daddario is good in sword fencing.

Daddario was nominated for Teen Choice Awards thrice in 2010, 2015 and 2017 for her part in ‘Percy Jackson & the Olympians: The Lightning Thief’ , ‘San Andreas’ and ‘Baywatch’,  respectively.

She was nominated for the 2013 MTV Movies Awards under the category Best Scared-As-Shit Performance for her role in the film ‘Texas Chainsaw 3D’.

Her film credits include ‘The Squid and the Whale’, ‘The Babysitters’, ‘The Attic’, ‘Percy Jackson’ film series, ‘Bereavement’, ‘Texas Chainsaw 3D’, ‘San Andreas’, ‘Baywatch’ and ‘The Layover’.