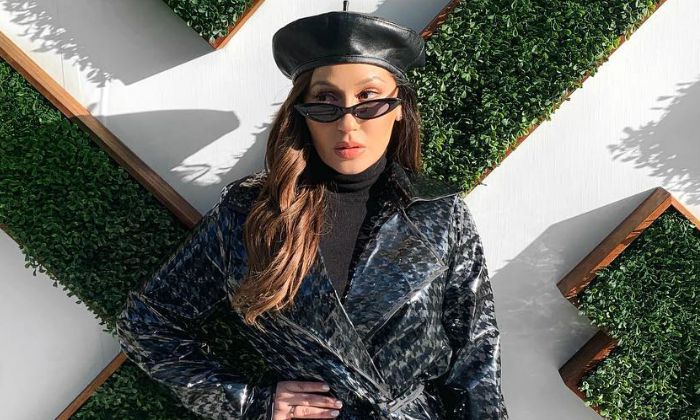 Who is Adrienne Bailon Houghton?

Adrienne Bailon is an American singer and actress probably best known as the talk show co-host on daytime’s The Real. She began her career as a singer and became a member of the girl group 3LW. In 2003, she starred in the Disney television film The Cheetah Girls as one of the four members of a female pop group that eventually turned into a girl group with the same name. They released their self-titled album in August 2003 which debuted at number 33 on the US Billboard 200. The girl group released one more album and appeared in many Disney original films and TV shows before disbanding in 2008.

Bailon embarked on a solo career in 2017 and released a Christmas album, New Tradiciones, which reached number one on the US Latino chart on iTunes. In addition to hosting a handful of TV shows, she has also guested on TV series like That’s So Raven, The Cheetah Girls, Being Mary Jane and Famous in Love.

Adrienne Bailon was born on the 24th of October 1983, in Lower East Side, Manhattan, New York City, New York, United States of America. She is currently 37 years old.

Adrienne Bailon is the youngest daughter of Nilda Alicea and Freddie Bailon. Her mother is Puerto Rican while her father is from Ecuadorean. She has an older sister named Claudette.

Her parents divorced when she was young and not long after her mother married guy named Joe Felix. They raised Bailon and her older sister together.

For education, she attended High School for Health Professions and Human Services in Manhattan, New York City. She originally aspired to become an obstetrician, but that everything changed after she was discovered by Latin pop singer Ricky Martin. He lured her to pursue a career in music.

Adrienne Bailon began dating musician Israel Houghton in February 2016 and six months later, they got engaged on August 12, 2016 in Paris. They tied a knot on November 11, 2016 in Paris. Bailon adopted her husband surname after their marriage as well as she became the step-mother to Israel’s four children from his first marriage.

She had previously been romantically linked up with American basket player LeBron James from 2003 to 2004. Her relationship with American socialite and TV personality, Rob Kardashian attracted a lot of media attention as she frequently appeared on the TV show Keeping Up With the Kardashians. The couple dated for over two years until before their breakup in 2009.

In October 1999, pop singer Ricky Martin discovered her while singing in a Church choir and offered her a slot to perform as back-up singers as part of his Livin’ la Vida Loca Tour concert show later that night. She accepted the offer that eventually changed her life.

Not long after her debut on stage as a back-up singer, she joined the girl group 3LW as a lead singer. It was basically a duo band with singers Kiely Williams and Naturi Naughton and after her arrival it became a trio group.

They released their debut album “3LW” on November 14, 2000 on Epic Records. The album charted at number 29 on the Billboard 200 and at number 19 on Top R&B/Hip Hop albums charts. It sold more than 1.3 million copies in the US and eventually went Platinum.

In 2002, she left the group and formed a girl group called The Cheetah Girls in 2003 along with her co-stars from the Disney TV film of the same name. That August, they released a soundtrack called The Cheetah Girls, which debuted at number 33 on the Billboard Hot 100. Their debut studio album, Cheetah-licious Christmas, was released on October 11, 2005 that peaked at number 74 on the Billboard Hot 100.

In 2017, she launched her solo career and released her debut solo album New Tradiciones on the 17th of that November on Briodge Music. It’s a Christmas album which contained both English and Spanish songs. It reached number one on the US Latino chart on iTunes.

Adrienne landed her first acting role on an episode of Nickelodeon’s sitcom Taina in 2001.

Adrienne’s first acting gig came in 2003 when she was cast as Chanel Simmons on Disney’s musical comedy film The Cheetah Girls.

In 2005, she played the character of Dominique in Thomas Carter’s biographical sports drama film, Coach Carter.

Adrienne Bailon Houghton has earned massive fame as well as established herself as singer with her chart busting tracks and albums. She achieved a lot of success during her reign with the girl groups – 3LW and The Cheetah – that continued even after she went solo.

Apart from her successful career as a singer, Bailon has also shined as a television personality. As a passionate actor, she has featured in a string of television films as well as feature films. Since 2014, Houghton is one of the four co-hosts of the daytime talk show The Real.

Adrienne Bailon’s net worth, as of 2020, is estimated to be about $4 million. Her incredible net worth comes from her career accomplishments as a singer, actress and television personality.

She has accrued a huge fan following across social media, thanks to her mesmerizing voice and attractive looks. She has garnered 5.1 million-plus followers on her Instagram page and over 650 thousand followers on Twitter. Her Facebook page has accumulated over a half million followers and her YouTube channel has 1.1 million subscribers.

She has been singing since she was five years old.

Pop singer Ricky Martin discovered Bailon while performing with her church choir at Madison Square Garden in October 1999. He hired four singers from the choir including Bailon to join him onstage as a back-up singers at his concert that night.

In late 2003, Disney put together the stars of their original film, The Cheetah Girls, and formed a girl band under the same name.

The Cheetah Girls disbanded in 2008 after its members decided to pursue solo careers.

She is a huge fan of fellow NuyoRican Jennifer Lopez and Tejano singer Selena.

In addition to English, she is also fluent in Spanish.

She received NAACP Image Awards in the category Outstanding Talk Series along with other hosts of the The Real in 2018 and 2019.

In 2018, she as awarded the Daytime Emmy Awards for Outstanding Entertainment Talk Show Host for her role in the talk show The Real.