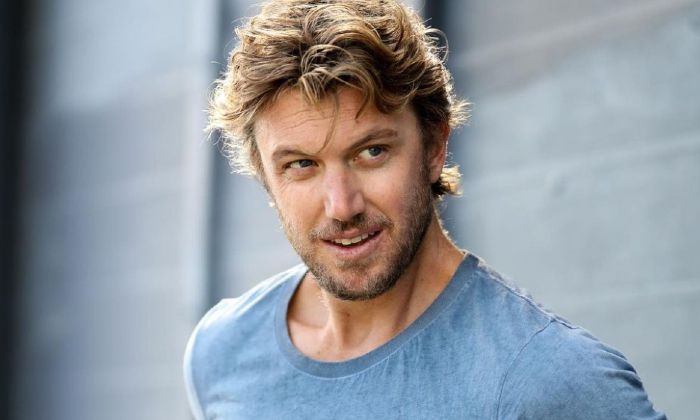 Adam Demos is an Australian actor. He was thrust into the spotlight for playing Jake Taylor, Christina Milian’s love interest in the Netflix romantic comedy movie, Falling Inn Love. Prior to gaining global stardom as Jake Taylor, he’s credited with playing a recurring character of Nate Baldwin in the drama series, Janet King, starring Marta Dusseldorp as well as for portraying August Walker in the drama series Unreal.

His other acting credits include Home and Away, Rescue: Special Ops, Winners & Losers, and Cooped Up. In 2021, he joined Netflix’s Sex/Life, playing the role of Brad Simon alongside Mike Vogel and Sarah Shah.

Adam Demos has kept a whole lot of information about his family and his early life to himself. He was raised by his single mother, whose name is not known, in Wollongong, a city on the coast of New South Wales, Australia.

He graduated from Dapto High School in 2003. Though he developed an early interest in acting, he worked as a construction laborer for years before enrolling at the Screenwise Film & TV School Sydney, from where he graduated in the year 2009.

Adam Demos is in a relationship with Sarah Shahi, his co-star from Netflix’s comedy-drama series Sex/Life. The actress, who was a former NFL Cheerleader, is best known for The L Word (2008), Fairly Legal (2011–12), and Person of Interest (2012-16).

As of 2022, Adam Demos has an estimated net worth of $1 million, earned from film and television appearances.

Adam’s acting career took off in 2009 when he earned a guest spot in the soap opera Home and Away.

He was cast in the recurring role of Nate Baldwin in the drama TV series, Janet King, a spin-off series of the 2011 legal drama Crownies.

In 2022, he starred as Max Vaughn in the Netflix original movie A Perfect Pairing.