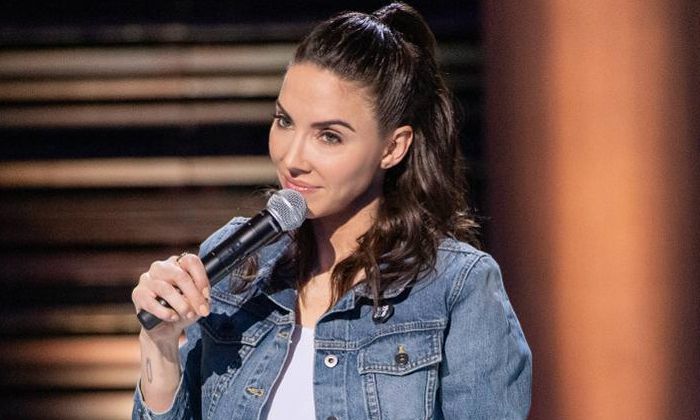 Whitney Cummings is a famous comedian, writer, and actress in the American entertainment industry. She gained fame as a stand-up comedian and later transition to television and films. She created and starred in the CBS sitcom 2 Broke Girls, which lasted for six seasons, and the NBC sitcom Whitney, which was canceled just after two seasons.

Her comedies are so popular because of the topics that she covers and is often considered profane and observational. She mostly makes jokes on topics that are generally considered taboo. Her acting credits include Made of Honor (2008), The Ridiculous 6 (2015), and The Female Brain (2017).

Whitney Cummings was born on the 4th of September 1982, in Washington, D.C., United States of America. She is currently 39 years old.

Whitney is the daughter of Patti and late Eric Lynn Cummings. Her father (died 2017) was a lawyer and venture capitalist while her mother was a former public relations director at Neiman Marcus at Mazza Gallerie. She has two siblings; an older half-brother, Kevin Cummings, and an older sister, Ashley Cummings.

For education, she studied at Andrew’s Episcopal School in Potomac, Maryland, graduating in 2000. She was into modeling during her teenage years and worked as a runway and catalog model.

Whitney was also an intern at WRC-TV aka NBC 4 as a multimedia journalist and groomed her actings skills at the Studio Theatre in Washington, D.C.

Being a public figure, Cummings has always managed to keep her private life away from the limelight. Nevertheless, her dating news surfaced on the media here and there.

It is known that she is in a relationship with a guy named Miles Skinner who works as a Group Creative Director in an advertising firm called VICE Media. He is also a freelance brand strategist for several high-profile companies. The couple came to know each other via a dating app and began dating in 2017. They got engaged in September 2018 on her 36th birthday.

After graduation, Whitney Cummings moved to Los Angeles with a plan to become a journalist. But, later, she decided that her choice of career would not suit her personality traits and started looking out for other alternatives.

In 2004, she joined the cast of MTV’s Punk’d as a prankster. Her career took a dramatic shift while working on the show when someone recommended pursuing a comedy career as it comes naturally to her. She started off performing at local comedy clubs and bowling alleys.

Whitney performed on ‘Tonight Show with Conan O’Brien’ and ‘Last Call with Carson Daly’ and made appearances on the E! show Chelsea Lately and Leary on Douchebags and Donuts. Cummings went on tour with Denis Leary and the Rescue Me Comedy Tour to promote the show’s sixth season.

She created and starred in the NBC sitcom Whitney and co-created the CBS sitcom, ‘2 Broke Girls’, and also had a talk show, ‘Love You, Mean It with Whitney Cummings’ on E! in 2012.

The talented comedian and actress have an estimated net worth of $30 million as of 2023. She received $60 thousand as remuneration per episode of Whitney. Nevertheless, she is one of the most talented comedians in the business who has found plenty of success down the line. She lives in an ultra-luxury gated estate in Woodland Hills, California, which she purchased in May 2019 for $4.3 million.

Her parents divorced when she was 5 years old that left an unerasable scar in her heart.

Whitney started taking drugs at the young age of 12 and ran away from home. She later opted out of that life and moved to Virginia st stay with her aunt.

She performed her first stand-up show at the age of 22 in a bar on Vine Street, Fountain Avenue in Hollywood.

In 2007, Variety placed her in their “Top Ten Comics to Watch” list.

She is good friends with Ginnifer Goodwin.

She became the first female comedian to perform in Dubai and Beirut.

In 2012, her show Whitney (2011) was nominated in the Outstanding Actress in a Comedy Series at The Women’s Image Network (WIN) Awards.

She has two rescued dogs, a pit bull named Ramona and a Great Dane named Frankie.

Whitney wrote and published a book titled “I’m Fine…And Other Lies” in October 2017 where she discussed things that happened in her life.