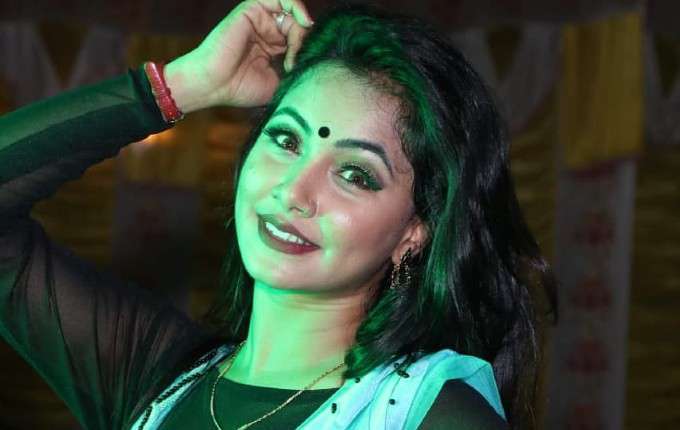 Trisha Kar Madhu is an Indian television actress and model who rose to prominence for her work in Bhojpuri cinema. Hailing from a modest Bengali family, she developed a strong liking for performing arts at an early age. She started off with modeling and tuned actor when she landed a role in a Bhojpuri serial. The actress has since become a popular face and the most sought-after actress in the Bhojpuri television industry.

She has worked alongside big names in Bhojpuri cinema such as Arvind Akela Kallu and Rakesh Mishra. In addition to her extensive acting credits, Trisha has appeared in several music videos and commercials. In August 2021, Trisha Kar Madhu garnered insane media attention after an intimate video of herself with her boyfriend leaked online. The video immediately created a buzz, putting her into the mainstream spotlight. It has since been circulated on social media.

When it comes to her family and early life, there is no information available right now, including the identities of her parents and their profession. Her mother’s name is Pratima Kar. Details about her siblings are not known as well.

She is a graduate of Ashutosh College.

Trisha Kar Madhu is known to be secretive when it comes to her personal life. She hasn’t disclosed anything about her love life or dating history to the media.

In August 2021, a filmed sex tape of the Bhojpuri actress Trisha Kar Madhu was leaked online. The leaked video has since gone viral on social media and it is being circulated online. It appears that Trisha shot the explicit video with her boyfriend some time ago and it has somehow found its way to the internet. Ever since the video went viral, she has found herself at the center of controversy with her being trolled and abused on social media. Although Trisha herself shot the video, it looks that it was published without her knowledge. The identity of the person in the video is still unknown.

Although she has done a lot of modeling shoots, it was the music video of the super hit song “Raja Tani Jaayi Na Behriya” in which she starred that made her popular.

She has worked with well-known names in the Bhojpuri cinema such as Pawan Singh, Khesari Lal Yadav, and Rakesh Mishra.

Trisha has been an item in many Bhojpuri films songs.

She has featured in many of actor and singer Arvind Akela Kallu’s music videos.