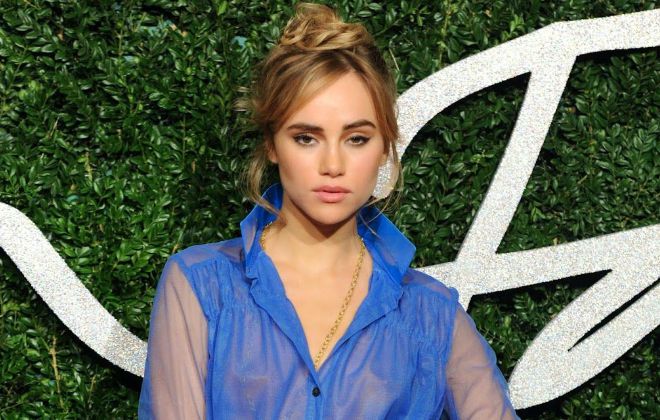 Suki Waterhouse is a famous English actress and model best known for her roles as Marlene in The Divergent Series: Insurgent and as Catherine “Kitty” Bennet in Pride and Prejudice and Zombies. She started her modeling career at age 16 and by 19, she came into the limelight when she was picked by ‘Marks and Spencer’ to do a lingerie modeling shoot. Her successful modeling career landed her roles in movies as well.

Suki Waterhouse was born on the 5th of January 1992, in Hammersmith, London, England, United Kingdom. She is currently 30 years old.

Suki is the daughter of Norman Waterhouse, a plastic surgeon, and Elizabeth Waterhouse, who works as a cancer care nurse. She has three siblings, two younger sisters, Maddi Waterhouse, and Imogen “Immy” Waterhouse, both are models, and one younger brother, Charlie Waterhouse.

Suki attended Ibstock Place School and later dropped out to focus on her modeling career.

Being a popular icon in the glamour world, Suki Waterhouse has been romantically linked up with many celebrities. She was in a relationship with American actor Bradley Cooper from 2013 until 2015 and has also dated stars like James Marsden, Nat Wolff, Richard Madden, and Jordan Barrett.

She dated dating Mexican actor, Diego Luna, who is 12 years older than her. They both first met during a shoot of the film and began dating each other in 2015. The couple ended their relationship after a while and again reconciled their relationship in early 2017. They finally called it quits in 2017.

Suki is currently in a relationship with actor Robert Pattinson.

Suki made her onscreen acting debut in 2012 in the English-language remake of the 1996 cult classic Pusher, alongside Agyness Deyn. She played the role of Mandy, the love interest of drug-pusher – yikes.

Her television debut came in 2010 when she appeared in a British comedy TV series Material Girl for her role as Lourdes.

She gained massive fame after her portrayal of Marlene in the sequel The Divergent Series: Insurgent (2015), based on the book of the same name.

She is also known for her starring role as Cecily of York in the 2017 British-American historical fiction television series, The White Princess.

According to various sources, Suki Waterhouse has an estimated net worth of $10 million.

Waterhouse was discovered in a pub in London when she was 16 years old. She became a known face in the modeling industry after she starred in a lingerie campaign for Marks and Spencer.

Suki has her own accessories line, called Pop and Suki, which she co-founded with her best friend and TV presenter Poppy Jamie.

Suki is the face of Burberry and Redken.

In April 2017, Waterhouse was chosen as the “Mercier Muse” for the makeup brand Laura Mercier.

In addition to her modeling and acting career, she is also a passionate photographer.

Waterhouse is best friends with fellow model Cara Delevingne and Georgia May Jagger.