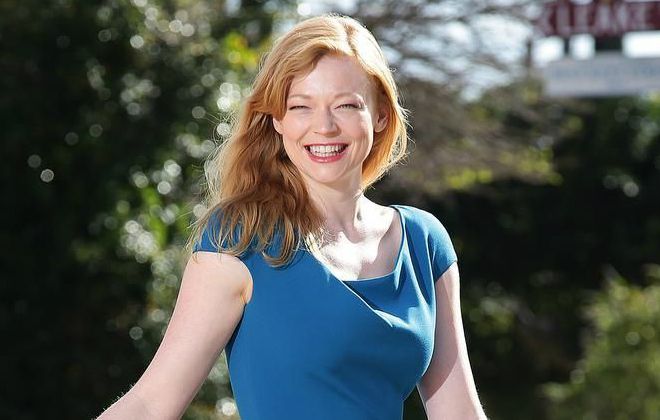 Sarah Snook is an Australian actress best known for her roles as Andrea “Andy” Cunningham Steve Jobs, Jane in Predestination, and Gertrude ‘Trudy’ Pratt in The Dressmaker. The latter two films earned her several awards and nominations. In 2018. she began playing Siobhan “Shiv” Roy in the HBO drama series Succession.

Sarah Snook was born on the 28th of July 1987, in Adelaide, South Australia, Australia. She is currently 33 years old.

Speaking about her personal life, there’s very little is known nor has she revealed anything about her family and her early life. Details about her parents and her siblings are unknown.

Later, she got admission at the National Institute of Dramatic Art in Sydney, from where she graduated with a Bachelor of Fine Arts in Acting in 2008,

She is currently in a relationship with Angus McDonald.

Sarah made her first television appearance as Sophie in an episode of the Australian medical drama series All Saints in 2009.

Best known for her roles in movies like Predestination, The Dressmaker, and Steve Jobs.

As of 2023, Sarah Snook has an estimated net worth of $3 million, according to the media.

She was raised in Adelaide, South Australia.

Sarah Snook developed an interest in acting at a young age and was offered a scholarship to study drama at Scotch College, Adelaide.

She worked as a fairy at children’s parties and even worked at some hotels before entering into mainstream cinema.

She appeared in King Lear with the State Theatre Company of South Australia. She played Saint Joan in the Sydney Theatre Company’s production in 2018.