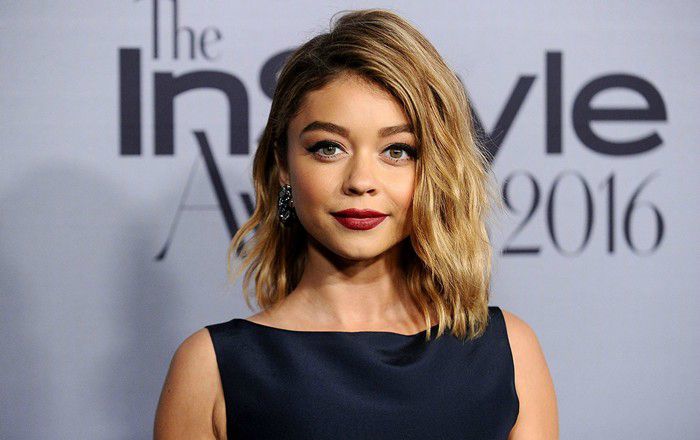 Sarah Hyland is an American actress who rose to fame for her role as Haley Dunphy on ‘Modern Family’. Her stellar performance in the series earned her a Critics’ Choice Television Award nomination Best Supporting Actress in a Comedy Series. In films, she became known for her acting in ‘Struck by Lightning’, ‘Scary Movie 5’, ‘Vampire Academy’, and ‘XOXO’.

Sarah Hyland comes from a family of actors, Her parents are actors Melissa Canaday and Edward James Hyland. Her younger brother, Ian Hyland, is also an actor.

She has Dutch, English, German, Irish, Scottish, and Welsh roots.

Sarah Hyland is in a relationship with a reality TV personality and Radio DJ, Wells Adams since fall 2017. The couple announced their engagement in July 2019.

Previously, she was in a long-term relationship with actor Matt Prokop from 2009 to 2014. She then dated her ‘Vampire Academy’ co-star Dominic Sherwood from 2015 until 2017.

Sarah Hyland landed her first acting gig as Elizabeth in the 1997 film ‘A Tall Winter’s Tale’. She played a minor role in the film.

Her first major role came in 1997 when she was cast to star as Howard Stern’s daughter in the movie ‘Private Parts’.

Hyland began her television career with a guest appearance in the British drama series ‘Trinity’. She portrayed the role of a shy girl in just one episode titled “No Secrets.”

Sarah earned worldwide fame and won the hearts of the audience for her role as Haley Dunphy on the ABC sitcom Modern Family. The show saw its premiere in 2009 and has been running successfully for over 9 years. Since 2012, it has been the tenth-highest revenue-generating show. She shared four Screen Actors Guild Awards for Outstanding Performance by an Ensemble in a Comedy Series with her cast members and garnered a Critics’ Choice Television Award nomination Best Supporting Actress in a Comedy Series.

She was diagnosed with kidney dysplasia when she was 9 years old and underwent a kidney transplant in April 2012 with her father’s kidney. Over the years, She has had underwent ten surgeries to improve her health.

At the age of 18, she moved to Los Angeles, California, to pursue her acting career.

In 2012, she featured in Nintendo 3DS ad campaign along with Dianna Agron and Gabby Douglas.

She is close friends with Julie Bowen, Ariel Winter, and Adam Devine.