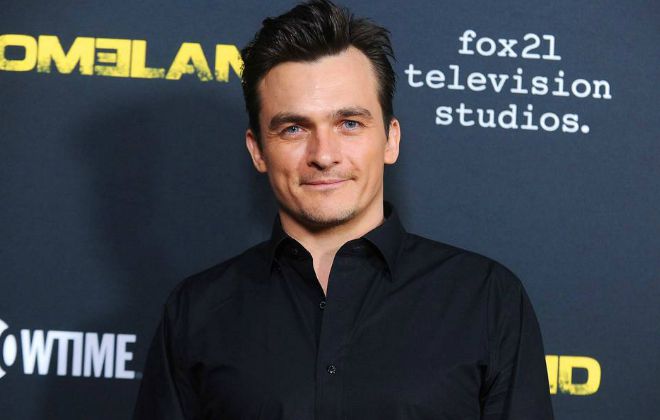 Rupert Friend is an English actor from Stonesfield, Oxfordshire, who gained fame for his portrayals of Mr. Wickham in the 2005 film Pride and Prejudice and Lieutenant Kurt Kotler in the 2008 film The Boy in the Striped Pyjamas. He played Peter Quinn on the Showtime series Homeland from 2012 to 2017, for which he earned an Emmy nomination in 2013. His other acting credits include The Young Victoria as Prince Albert, Hitman: Agent 47 as Agent 47, and The Death of Stalin as Vasily Stalin.

Rupert Friend was born on the 1st of October 1981, in Oxfordshire, England, United Kingdom. He is currently 40 years old.

Rupert Friend was raised in Stonesfield, Oxfordshire by his parents David Oxton Friend and Caroline Friend. His father was a cultural historian while his mother was a solicitor. He has a younger sister named Kate Friend. He’s of Scottish and English descent.

Rupert attended The Marlborough School in Woodstock, England, and went on to study at the Cherwell School and d’Overbroeck’s College in Oxford.

After graduating from college, he studied acting at the Webber Douglas Academy of Dramatic Art in London.

Rupert Friend is married to Aimee Mullins, an American athlete, and actress, since May 1, 2016. They both began dating in 2013 and got engaged in December 2014.

He previously dated fellow English actress Keira Knightley from 2008 to 2010.

Rupert Friend made his screen debut as Billy Downs in the 2004 film “The Libertine”, for which he won the Ischia Film Festival Award for Best International Newcomer. He also won the 2005 Satellite Award for Outstanding New Talent.

Some of his notable film credits include “Pride & Prejudice”, “Mrs. Palfrey at the Claremont”, “Outlaw”, “The Boy in the Striped Pajamas”, “The Young Victoria”, “Starred Up”, “Hitman: Agent 47” and “The Death of Stalin”.

Rupert won his first acting job as Peter Quinn on the Showtime series “Homeland”, a role that earned him an Emmy nomination in 2013, among other nominations.

In 2010, Friend made his stage debut as Mitchell in the UK premiere of The Little Dog Laughed.

Rupert has done TV commercials for Jaguar USA, William Vintage, Kentshire, among others.

As of 2022, Rupert Friend has a net worth of $4 million dollars, which he accumulated over the years from his successful acting career.

As a teen, he wanted to be an archaeologist like Indiana Jones, inspired by his film  Indiana Jones and the Last Crusade, but he dropped it, realizing that it was not as remunerative as he thought.

He briefly served as a member of the band Marrakech.

In 2005,  he won the ‘Outstanding New Talent’ Golden Satellite at the International Press Academy Awards for his role in the movie Mrs. Palfrey at the Claremont.

Friend was originally considered for the role of James Bond but he turned it down, according to James Bond casting director Debbie McWilliams.