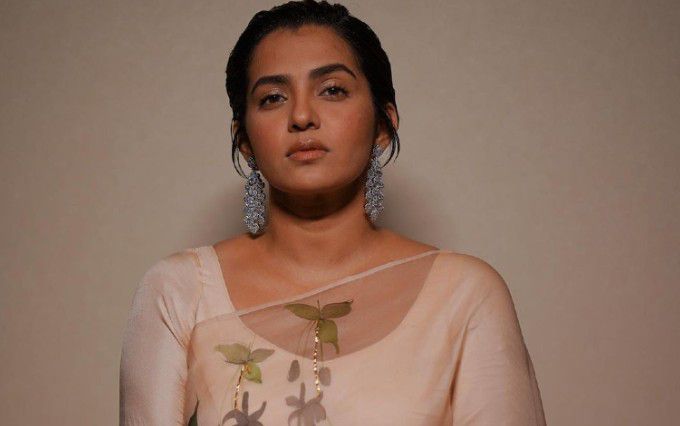 Parvathy Thiruvoth Kottuvatta, better known by her screen name, Parvathy is an Indian film actress. Born and raised in Kozhikode, Kerala, the beautiful lass has starred in different Indian language films including Malayalam, Tamil, Kannada, and Hindi. Having featured in different genres of Malayalam films, she was honored with a Kerala State Film Award for Best Actress for her performances in the Malayalam films Ennu Ninte Moideen and Charlie in 2015. She also won many Filmfare Awards during her stint as an actress.

Parvathy was born on the 7th of April 1988, in Kozhikode, Kerala, India. She is currently 34 years old.

Thiruvothu attended the Kendriya Vidyalaya school in Pangode. She graduated with a B.A. degree in English Literature from All Saints’ College at Trivandrum, Kerala. She is currently pursuing her M.A. through distance education.

There are not many known details about her relationship status.

Parvathy made her acting debut in the 2006 Malayalam film Out of Syllabus, portraying a supporting role as a college student.

Her first lead role in Kannada came in 2007 with the film Milana alongside Puneet Rajkumar, which went on to become a commercial success.

In 2008, She starred in a lead role in Sasi’s Poo alongside Srikanth, portraying the role of a young Tamil village girl named Maari. This film marked her debut in Tamil.

She made her Bollywood debut with the comedy-drama film Qarib Qarib Singlle, paring alongside Irrfan Khan.

After her graduation, Parvathy went on to host a music show at Kiran TV, a full-time music channel based in Thiruvananthapuram.

She hasn’t endorsed any brands or products yet.

Parvathy has an estimated net worth of US$0.7 million as of 2020. Thiruvothucharges Rs 35 – 50 lakhs per film. She is one of the top leading actresses in Mollywood. She has established a name for herself in the industry and has increased her salary after her Hindi debut.

Born in a family of lawyers, Parvathy developed an interest in acting since her childhood and worked hard to achieve her destiny.

She struggled a lot to get to where she is off today. While she was struggling to get film offers, many asked her to sleep with them in order to cast her in their films. But she said a big ‘No’ to all of them.

Thiruvothu turned vegetarian in 2015 and restrained herself from using dairy products and leather products.

She is an acclaimed Bharatanatyam dancer.

She won a Filmfare Award for Best Actress – Malayalam for her role in the movie Take Off (2017).

In 2018, for her work in the movie Take Off (2017), she won several awards including National Film Awards and Kerala State Film Awards for Best Actress.

Along with other actors in the Malayalam movie industry, she founded Women in Cinema Collective, the organization for the welfare of women workers in the industry.

In October 2020, she resigned from the Association of Malayalam Movie Artists (AMMA) to protest against General Secretary Edavela Babu’s controversial remarks about a fellow female actor.

In 2021, she starred as Waheeda in the Tamil language anthology web series Navarasa.