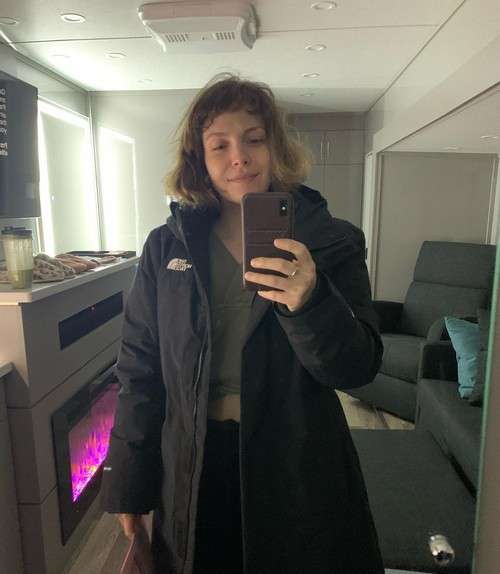 Paige Spara is an American actress who gained prominence for her portrayal of Audrey Piatigorsky in the ABC Family sitcom Kevin from Work. In 2017, she landed a recurring part on the ABC medical drama The Good Doctor as Lea Dilallo. It not only put her in the spotlight but also became the most defining role she had played in her career to date. She joined the series as a recurring cast and eventually became a series regular from season two. Her film credits include Home Again and She’s in Portland. As of 2023, Paige Spara has an estimated net worth of $1 million dollars.

Paige Spara was born on the 9th of August 1989, in Washington, Pennsylvania, the United States. She is the middle child of three children to Kevin, a hair salon owner, and his wife, Kim Spara, who works as a dental hygienist.

Her zodiac sign is Leo, which according to the star’s personality, she’s vivacious, outgoing, and fiery. People born under this sign are usually known for their warm nature and high self-esteem. Check out to find which celebrities are Leos and discover their incredible stories.

Paige Spara is known to be secretive when it comes to her personal life. She keeps the romantic aspect of her life to herself while maintaining a low profile.

Once out of college, Paige Spara started auditioning for TV and film roles and ended up scoring roles in short films like Prospect Street and What Showers Bring.

In 2015, Spara landed her first major role in the ABC Family sitcom Kevin from Work, playing the role of Audrey Piatigorsky. The show was canceled the same year.

Spara’s most noticeable appearance in her entire career came in early 2017 when she landed a recurring role in the ABC medical drama The Good Doctor as Lea Dilallo, the best friend and love interest of the protagonist Shaun Murphy. Shortly after the season one run, she was made the series regular for the show’s second season, which also stars Freddie Highmore, Nicholas Gonzalez, Antonia Thomas, and Beau Garrett.

As of 2023, Paige Spara’s estimated net worth sits at $1 million dollars.

Spara showed her love for acting at a young age and joined Kids’ Theatre Works at the age of 12 where she honed her acting skills by performing in plays.

Before attaining fame as an actor, she has done commercials for brands like Forevermark Jewelry, Sally Hansen nails, and Volkswagen Golf.

She even worked as a guide for a Gossip Girl bus tour in New York City.

She has a featured podcast called The Inbetween.