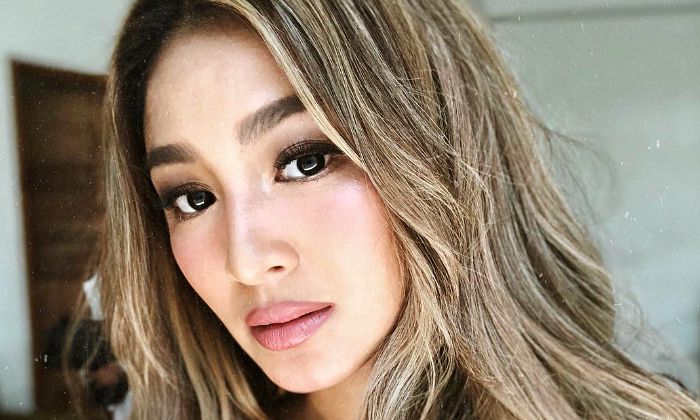 Who is Nadine Lustre?

Hailing from Quezon City, Philippines, actress, and singer, Nadine Lustre made a splash in her home country, playing Eya Rodriguez in the film adaptation of the popular Wattpad novel Diary ng Panget. She is also known for having been a member of the all-female group Pop Girls, which she left to embark on a solo career. Her other acting credits include parts in the television series On the Wings of Love as Leah Olivar and the romantic comedy Till I Met You as Iris Duico-Valderama. Nadine won several awards including the Young Critics Circle Best Performer award and the Gawad Urian for Best Actress for her role as Joanne Candelaria in the romantic drama film, Never Not Love You. As a singer, Nadine has released four albums so far such as Pop Girls, Diary ng Panget: The Movie Soundtrack, Nadine Lustre and Careless Mixtape.

Nadine Lustre was born on the 31st of October 1993, in Quezon City, Philippines. She is currently 27 years old.

Nadine Lustre is the oldest of four children to Myraquel Paguia-Luster and Ulysyess Lustre. She has three younger siblings, one sister named Naomi Lustre and two brothers named Ezequiel Lustre and Isaiah Lustre (Died in 2017).

For her education, Nadine studied at Diliman Preparatory School and then attended Colegio de San Lorenzo in Congressional Avenue, Quezon City, where she majored in Communication Arts in Films.

Talking bout her romantic life, Nadine Lustre is possibly single as she had recently broken up with her longtime boyfriend James Reid. Reid is an Australian actor whom she met on the sets of “Diary ng Panget” in 2014 and they began dating in 2016.

Rumors sparkled out in early 2020 when entertainment journalist Ricky Lo wrote a column stating that they are no longer together and the breakup was inevitable. Nadine remained a mute spectator for weeks but finally opened up during her first media interaction this year that the breakup was true, saying:

Nadine Lustre made her acting debut in 2012 when she was cast in the supporting character of Dina in the Filipino fantasy comedy film, Petrang Kabayo.

Lustre launched her television career as a host with a television show called Disney Channel On Assignment in 2005.

In 2011, she landed the role of Candice Tuazon in the Filipino drama-romance series, P. S. I Love You. It is the TV sequel of the 1981 movie of the same name starring Gabby Concepcion, Dina Bonnevie and Alex Gonzaga, among many others.

Nadine’s first debut album came out in 2009 when she was a member of the all-female group Pop Girls. The self-titled album was well received by the audience.

After leaving the group, she contributed to the soundtrack of the movie Diary ng Panget, which was released on Viva Records in 2014.

It’s a known fact that Nadine Lustre got started very early on her path to stardom. From hosting television shows to acting to singing, the multi-talented actress has proved that she can succeed in anything thrown at her throughout her career. Nadine Lustre’s net worth’ as of 2020, is estimated to be around $8 million. She was named one of the top richest actors in the Philippines by Phil news.

The young beautiful and passionate woman has turned everything to gold when it comes to her career endeavors. She has a mass fan following on social media and fans can follow her on different social media pages to stay in touch with her.

She has graced the covers of Cosmopolitan Philippines and Meg magazines in February 2015 and May 2015 respectively.

In addition to acting and singing, she is also passionate about entrepreneurship. She launched her first store, Nail’s Glow and Body Spa, at the age of 23, and she’s still the youngest franchisee of the company till now.

Nadine served as a lead vocalist of the all-girl music group, Pop Girls, but left the group in 2011 to focus on her solo music career.

She won the “Most Popular Loveteam in Movies & TV Award” along with her ex-boyfriend James Reid and the “Female Face of the Night Award” at the 2014 Guillermo Mendoza Box Office Entertainment Awards.

Nadine was named the “Most Beautiful Woman in the Philippines” by Starmometer in 2016.

She was chosen as the “Sexiest Woman” by FHM Philippines in 2017.

In 2016 she and her ex-boyfriend James Red went on a world tour titled “JaDine in Love” covering major cities including Doha, Dubai, London, and Milan. They also toured across the United States and Canada.

In April 2018, Nadine launched her make-up collection called Lustrous and followed it up with her signature fragrance called Luster in December 2018.