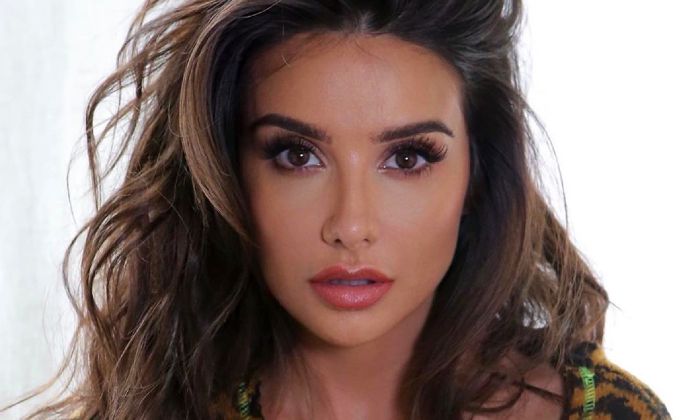 Mikaela Hoover is an American actress who reached stardom for her starring roles in such films as The Guardians of the Galaxy in which she played Glenn Close‘s Assistant and in the movie The Belko Experiment in which she portrayed Raziya Memarian. She’s also known for her roles in TV series and films like Lucifer, Anger Management, Happy Endings, Airplane Mode, Guest House, and The Suicide Squad. As of 2023, Mikaela Hoover has a net worth of $1 million dollars.

Mikaela Hoover was born on the 12th of July 1984, in Colbert, Washington, United States of America. She’s currently 38 years old.

Mikaela Hoover is the oldest of four siblings and is of Iranian, English, and German ancestry. In addition, she’s part Spanish, Persian, and Italian. She grew up with her three younger siblings in Colbert, including two sisters, Jazlyn and McKenzie.

Growing up, she took dance classes and appeared in school plays as well as starred in local commercials. After high school, she enrolled at Loyola Marymount University’s theatre program in Los Angeles from which she obtained her bachelor’s degree in theatre.

Mikaela Hoover hasn’t shared too many details when it comes to her personal life. According to various reports, she had a short-term relationship with actor Nathan Fillion, known for his lead role in the TV show Castle. She is currently believed to be single.

Mikaela Hoover had always wanted to be an actress from a young age. She later studied acting hoping to make it big in Hollywood. She started her acting career in 2006 in the TV series SamHas7Friends in which she played the role of Cami.

In 2008, she secured a minor role in the TV series Casanovas. That same year, she landed her first major role in the TV series Sorority Forever as Madison Westerbrook, co-starring Jessica Rose, Jessica Morris, and Taryn Southern. This was her first of many lead roles as an actress which brought her a lot of fame and recognition apart from landing several other major roles.

As she moved forward with her career, she had guest roles in television series like How I Met Your Mother, Two and a Half Men, The League, and Saint George. In 2014, she appeared as Nova Prime’s Assistant in the internationally acclaimed movie Guardians of the Galaxy.

Her most recent career accomplishments include Airplane Mode, Holidate, Guest House, and The Suicide Squad.

Mikaela Hoover has succeeded in that industry she has expressed interest in becoming an actress. She uses social media to offer a glimpse into her personal life as well as her professional. She urges her fans to take full advantage of it.

Though she gained the most attention for Guardians of the Galaxy, Mikaela was also seen in other notable movies and TV series. Collectively, each of her acting jobs helped her gain a net worth of around $1 million dollars.