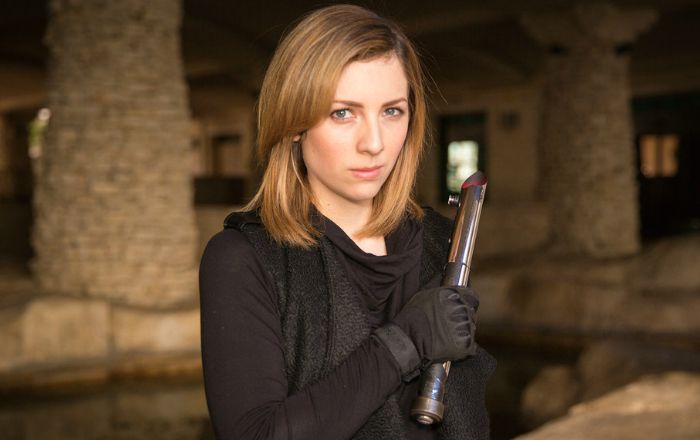 Meghan Camarena is an American YouTube personality and television star who is known for her work in web series, films, and TV shows. She appeared as a contestant on The Amazing Race 22 and The Amazing Race: All-Stars. She also worked as a host at Teen.com, Disney’s Polaris Primetime, and was the backstage correspondent for season 2 of the TruTV talent contest Fake Off. She has a YouTube channel called “Strawburry17” on which she posts cooking, gaming, and lifestyle-related videos.

Meghan Camarena was born on the 17th of July 1987, in Fresno, California, United States of America. She is currently 34 years old.

As far as her family is concerned, very little is known about her parents and her childhood. Her parents’ identity is unknown. She has four siblings, two older half-brothers and younger twin brothers from her parents’ earlier marriages. Her two brothers are Christian and David Camarena.

Meghan Camarena was in a relationship with fellow YouTuber Jimmy Wong and they broke out in 2013.

Meghan Camarena was not cast in a feature film yet but has featured in many web series and short films. In 2014, she directed, produced, and starred as Malla Sharp in a short called “The Grey Road.”

Later that year, she was cast in the second season of the web series titled “The New Adventures of Peter + Wendy” playing her role as Bille Jukes. Later, she went on to appear in a bunch of web series like Power Rangers Hyperforce, Tabletop, and Unlocked: The World of Games, Revealed.

In 2013, Meghan appeared as a contestant along with Joey Graceffa in the reality television show The Amazing Race 22.

There is no information about the brands she has had worked with, but she makes use of the immense popularity on social media to promote brands as well as products through videos and posts.

Unfortunately, we do not have accurate information pertaining to her net worth. But considering that she has been vlogging for over years, she must have a net worth in the millions.

She created her YouTube channel “strawburry17” in 2007 and started posting videos on unboxing cutesy Japanese toys, taste-testing weird foods from around the world, and reviewing apps and games.

She stated in an interview that she chose her screen name as strawburry17 as she was a big fan of the Strawberry Shortcake cartoon, and she just misspelled the name, adding her birthday date 17.

She moved to Los Angeles with the prize money that she won from the YouTube video contest called Next Up. It was a great decision she took around that time which helped to accomplish her future goals and dreams.

In 2012, Camarena went on to tour India where she made videos for the nonprofit organization Water.org.

She produced videos for Teen.com and also hosted their YouTube channel along with Graceffa.

In 2015, she was the backstage correspondent for the second season of Fake Off, which was a talent show broadcast on TruTV.

Camarena cited Tina Fey and Amy Poehler as some of her biggest influences and inspirations.

Camarena, Graceffa, and YouTuber Catherine Valdes had also created a band called The Tributes with music video parodies based on The Hunger Games film series.