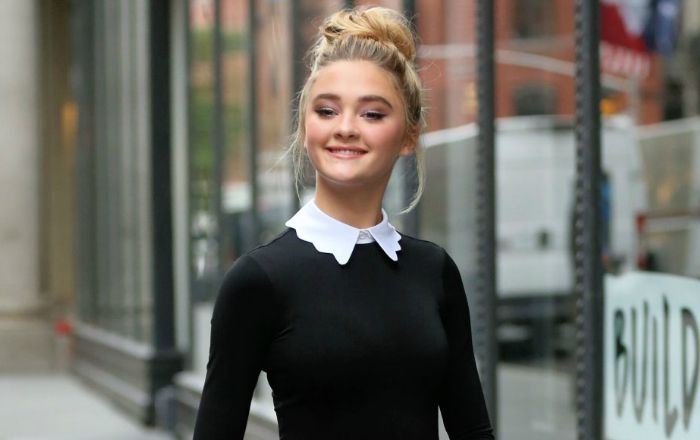 Lizzy Greene is an American actress who is better known for her portrayal of Dawn Harper in Nickelodeon’s ‘Nicky, Ricky, Dicky & Dawn’. Among other appearances, the young beauty is best recognized for her appearance in television films, ‘Damaged Goods’ and ‘Tiny Christmas’. She is a series regular on the upcoming ABC series ‘A Million Little Things’, in which she portrays the character of Sophie Dixon.

Lizzy Greene was born on the 1st of May 2003, in Dallas, Texas, United States of America. She’s currently 19 years old.

Talking about her family background, very little is known about her personal life. Her mother’s name is Amy and she has an older brother, Garrett Green. Apart from this information, everything about her early life remains a mystery.

It appears that Greene isn’t dating anyone as she focuses on building her acting career.

Lizzy Greene has not acted in any feature film yet. But she has starred in television films like ‘Damaged Goods’ and ‘Tiny Christmas’.

Lizzy started her acting career in 2014 when she was cast as a series regular on Nicky, Ricky, Dicky and Dawn. first started appearing in a recurring role as Dawn Harper

She earned a lot of fame and recognition for playing Dawn Harper on Nicky, Ricky, Dicky and Dawn.

She developed an interest in acting from a young age.

Lizzy was discovered at the age of 13 years old by a Los Angeles talent manager while she was attending John D Aquino’s Young Actor’s Intensive workshop in 2013.

She has a German shepherd named Jett and a Bombay cat named Coco Chanel.

She was a tomboy during her young age.

Lizzy Greene can speak Spanish a little bit other than English.