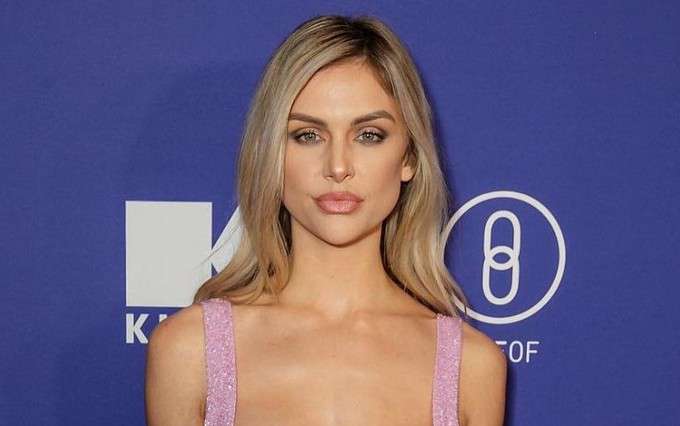 Lala Kent is an American singer, model, and actress who became known to the world for her exceptional work in the famous reality series Vanderpump Rules on Bravo. Besides Vanderpump Rules, she has also starred in such films as The Mentor, One Shot, The Row, 10 Minutes Gone, Hard Kill, The Estate, American Traitor: The Trial of Axis Sally, and Out of Death.

As a model, Lala has modeled for several renowned brands like Dior and Forever 21. The stunning beauty is also the author of the book titled Give Them Lala, which arrived in 2021. She has amassed an incredible following of over 1.7 million followers.

Lala is the oldest daughter of Kent Burningham and Lisa Burningham. Her father passed away on April 23, 2018. She grew up with her younger brother, Easton Burningham, in Salt Lake City, Utah, where she completed her formal education.

Lala Kent began dating film producer Randall Emmett in 2016 and they were together until they ended their relationship in 2021. While on Vanderpump Rules, she briefly spoke about her personal life, including her relationship with Emmett. She gave birth to a baby girl named Ocean Kent Emmett, her first child with Emmett, on March 15, 2021. In October 2021, she announced that they had both separated.

In a podcast with Katie Maloney, Lala spoke about her dating life where she said that she’s in a relationship with one guy whose identity has not been revealed.

Although Lala Kent began her career in the late 2000s, she rose to fame after she appeared on the Bravo reality series Vanderpump Rules in 2015. She gained so much popularity with the show that she landed in several reality shows like Celebrity Page, Keeping Up with the Kardashians, Watch What Happens Live with Andy Cohen as well as various editions of The Real Housewives series.

Undoubtedly, Lala Kent is one of the most popular faces in the entertainment industry, especially on small screens. Her compelling gigs have helped her earn a net worth of $2 million as of 2023.

She made her acting debut in the 2009 film titled Reflections in the Mud as Lauryn. Following this, she starred in a ton of productions The Row, Vault, 10 Minutes Gone, Trauma Center, Spree, Hard Kill, The Estate, American Traitor: The Trial of Axis Sally, and Out of Death.

Lala has worked as a model for brands such as Smile Sciences, Teami, Dior, Forever 21, and PrettyLittleThing.

She had a tattoo on her right bicep “Rand”, which she changed to “bRand new after parting ways from Randall Emmett.

She posed a series of photos on Instagram featuring herself nude with her baby bump.