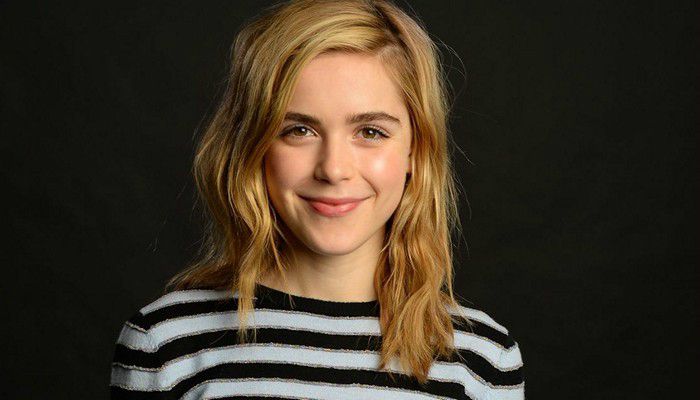 Kiernan Shipka is a young and gorgeous American actress who is best known for her portrayal of Sally Draper in AMC’s “Mad Men”, and B. D. Hyman in FX’s “Feud: Bette and Joan”. As a voice actress, she has voiced Jinora in the Avatar: The Last Airbender spin-off, “The Legend of Korra”. She has been cast as Sabrina Spellman on Netflix’s upcoming “Chilling Adventures of Sabrina”. Her film credits include “Fan Girl”, “One & Two” and “The Silence”.

Kiernan Shipka was born on the 10th of November 1999, in Chicago, Illinois, United States of America. She is currently 23 years old.

Kiernan Shipka is the daughter of John Young Shipka, a real estate developer, and Erin Ann (née Brennan). She apparently has one sister, whose identity is unknown. Of Irish ancestry, she spent her childhood in her hometown until she moved to Los Angeles with her family at the age of six. She completed her school education through homeschooling as she got into her acting career at a young age.

Speaking about her romantic adventures, Kiernan Shipka is reported to be dating model Charlie Oldman since early 2019. He is the son of actor Gary Oldman. But neither of them has confirmed nor refuted their relationship accusations.

Kiernan Shipka won her first acting role as Molly in the 2007 film “Dimension”.

She got her big break in 2015 when she was cast in an independent teen comedy film, “Fan Girl”, in which she played the leading role of “Telulah “Lu” Farrow”. It centers on a high school girl with a passion for filmmaking who sets out to make a movie about her favorite band and enter it in her school’s film competition.

Kiernan made her acting debut in 2006 in two episodes of the comedy-drama detective mystery television series “Monk”, in which she played the role of a little girl.

Her portrayal of Sally Draper on the AMC series “Mad Men” is considered to be her trademark performance to date. She received huge praise from critics for her role in the series and received a nomination for Best Supporting Young Actress for a Young Artist Award in 2011.

Kiernan’s net worth is estimated to be $3 million.

As a young girl, Shipka took Muay Thai boxing classes and she also holds a black belt in the Korean martial art Tae Kwon Do.

She made it to the entertainment industry as a child artist appearing in print ads and TV commercials. She has done over 100 print ads and two dozen advertisements.

Her family relocated to Los Angeles to help her attain acting goals.

She began studying ballroom dancing classes at the age of five.

Her first name “Kiernan” means “Son of a lord.”

Kiernan is one of the youngest people to be interviewed on Inside the Actors Studio in 1994.

She can be seen as Sabrina Spellman in Netflix’s upcoming supernatural TV series “Chilling Adventures of Sabrina”, based on the comic series of the same name.