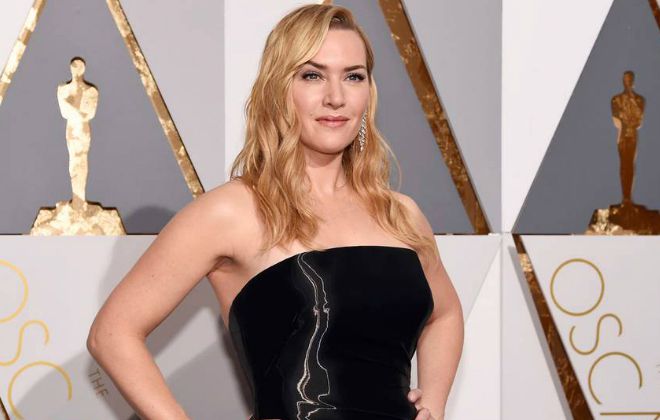 Kate Winslet is a famous English actress who catapulted to international stardom for her portrayal of Rose DeWitt Bukater in the 1997 classic romance Titanic. For her work as Hanna Schmitz in the spine-tingling romantic drama movie, The Reader, she won the BAFTA Award and Academy Award for Best Actress. She is one of the most successful actresses in Hollywood for decades. Her other credits include Eternal Sunshine of the Spotless Mind, Sense and Sensibility, Iris, Steve Jobs, Mildred Pierce, and Little Children.

Kate Winslet was born on the 5th of  October 1975, in Reading, Berkshire, England, UK. She is currently 46 years old.

Kate Winslet comes from a family of performers. She is the granddaughter of actors Linda and Archibald Bridges, who founded the Reading Repertory Theatre. Her parents and siblings were also part of the film fraternity. Her mother, Sally Anne (née Bridges), was a barmaid, while her father, Roger John Winslet, was a struggling actor who took laboring jobs to support the family.

Kate’s two sisters, Anna and Beth, are also actresses. She has one younger brother named Joss Winslet. Her uncle, Robert Bridges, is also an actor.

Winslet attended St Mary and All Saints’ Church of England primary school. She then attended Redroofs Theatre School in Maidenhead where she performed in many stage productions. Whilst in school, she began acting in stage productions and also worked simultaneously with the Starmaker Theatre Company in Reading.

She took acting jobs very early in her life. Her first acting appearance came when she was just seven years old, which was for a cereal television commercial. Three years later, she debuted on a TV series entitled Shrinks and the rest is history.

Kate Winslet was married to Jim Threapleton from November 1998 to December 2011. She met Jim on the set of Hideous Kinky, in which he was an assistant director, from 1998 to 2011. She has a daughter named Mia (b. 2000) from this marriage.

After her divorce from Threapleton, she started dating director Sam Mendes and they married in May 2003. The couple welcomed their son, Joe, later that year. The couple divorced in 2010.

Kate then married businessman Ned RocknRoll in December 2012. They have a son together named Bear Blaze Winslet (b. December 7, 2013). The couple has been living happily together since then.

Kate Winslet made her film debut in Peter Jackson’s 1994 psychological drama, Heavenly Creatures, which was based on the Parker–Hulme murder case of 1954. Winslet portrayed the character of Juliet Hulme, a teenager who assists her friend, Pauline Parker (played by Melanie Lynskey), in the murder of Pauline’s mother. Her performance in the film was highly praised by critics that changed the course of her acting career.

Winslet got her first television acting job in Dark Season, a British science-fiction television series in 1991. She played Reet in a total of six episodes of the series.

Kate Winslet has many credits to her name. The role that catapulted her to international fame and recognition was  Rose DeWitt Bukater, a 17-year old first-class passenger, in James Cameron’s epic romance, Titanic (1997). She played the love interest of Jack Dawson (Leonardo DiCaprio) in the film. The movie is considered to be one of her biggest commercial successes to date, grossing over US$2 billion at the worldwide box office against the production budget of US$200 million. The film won 11 Academy Awards and she earned a Best Actress nomination.

She played Hannah Schmitz in the 2008 movie The Reader. The film is based on Bernhard Schlink’s novel Der Vorleser and is about Hanna Schmitz, an illiterate Nazi concentration camp guard (Winslet), who has an affair with a teenage boy. Winslet researched the Holocaust and the SS guards. This role is one of her most significant roles to date, which gained her an Academy Award for Best Actress and BAFTA Award for Best Actress.

Winslet has featured in a number of advertisements including American Express Credit Cards, Sugar Puffs cereal (UK), Lancôme, and Longines Dolcevita watches. She has been the spokesmodel of Lancôme since 2007.

Winslet’s net worth is estimated to be $65 million dollars. She lives with her family in a luxurious house by the sea in West Wittering, Sussex, which she brought for £3.25 million in 2013.

She got interested in acting at a very young age and attended the acting school Redroofs in Maidenhead, England at age 11.

Kate Winslet was nominated for Best Supporting Actress, Manchester Evening News Award for her theatre role in “What the Butler Saw” as Geraldine Barclay in 1994.

She holds a unique record in the history of Academy Awards. She is the only actress to have been nominated twice (along with her co-star) for playing the same role in the same movie at different ages. The first two were Gloria Stuart and Kate in Titanic (1997). The second two were Judi Dench and Kate in Iris (2001).

She had once missed the premiere of Titanic as she was attending the funeral of her former boyfriend, Stephen Tredre.

Kate was born in the same hospital as her ex-husband, Sam Mendes.

She had her first screen kiss with Melanie Lynskey in the 1994 movie Heavenly Creatures.

In 1998, she was awarded the Sexiest Actress Award at the Entertainment Insider Awards.

She received a star on the Hollywood Walk of Fame at 6262 Hollywood Boulevard in Hollywood, California on March 17, 2014.

Time magazine named Winslet one of the 100 most influential people in the world in 2009.

Her wax statue has been placed at London’s Madame Tussauds.

Kate is one of thirteen actresses to have won the Academy Award, BAFTA Award, Critics’ Choice Award, Golden Globe Award, and SAG Award for the same performance.

She was awarded the CBE (Commander of the Order of the British Empire) in the 2012 Queen’s Birthday Honours List for her services to drama.

She also became the third actress in history to win two Golden Globe Awards at the same ceremony.

She prefers boots over ordinary shoes because it makes her feel that her feet are firmly on the ground.