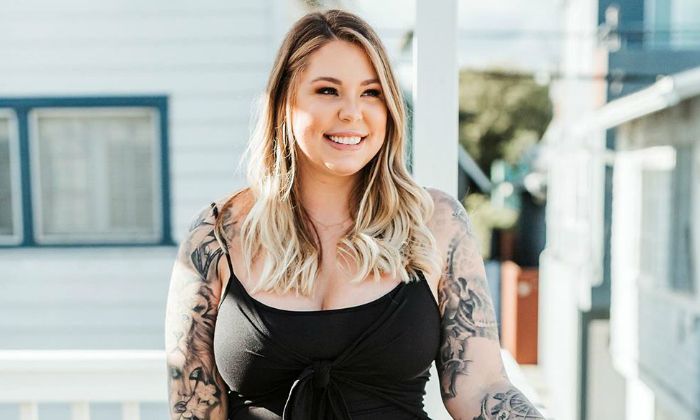 Kailyn Lowry is a television personality, author, and social media influencer from Honesdale, Pennsylvania. She first shot to fame in 2010 when she starred in the MTV reality television series 16 and Pregnant. The success of the series led her cast in the spin-off series Teen Mom 2, alongside Jenelle Eason, Chelsea DeBoer, and Leah Messer. Also a parenting blogger, Kailyn has her self-named blog where she writes about cooking, gifting ideas, DIY, parenting, and other relevant stuff. The New York Times best-selling book author who is also America’s favorite young mom has accumulated over 8 million combined followers across social media. She also co-hosts the podcast Coffee Convos along with Lindsie Chrisley.

Kailyn Lowry was born on the 14th of March 1992, in Honesdale, Pennsylvania, United States of America. She is currently 30 years old.

While not much is known about her family and her childhood, she shares a somewhat distant relationship with her mother Suzi Irwin. Though at times, her mother took care of her child, her parents did not support her when she became pregnant with her first child at the mere age of 15.

The details about her father are unknown, however, he was a construction worker and never had a close bonding with his family as he had to travel to different places for work. Her mom raised her and her two older brothers and one sister.

After graduating from high school, Kailyn enrolled at the Delaware State University where she obtained her bachelor’s degree in mass communications in 2017.

The Teen Mom 2 star has had been in relationships with many men throughout her life. Her first known relationship was with a guy, whose identity was not revealed, while she was still in middle school. As a result of the intimate relationship, she got pregnant with her first child at the age of 15. However, she didn’t receive any assistance from her parents and they pressurized her to abort the child. She aborted the child by the time she turned 16 which eventually led to a deep depression.

While she was in a depressed state, she got involved in a relationship with her boyfriend Jonathan Rivera. Moved by his care and loving, Kailyn became pregnant again at the age of 17 in 2009. Even though her parents forced her to have an abortion, she was strong enough and determined to have the child. She welcomed her first child, Isaac Elliot Rivera, with her boyfriend Rivera, on January 18, 2010.

Not long after she gave birth to her son Isaac, their relationship fell apart after she discovered that her boyfriend was cheating on her. At the same time, she also developed feelings for her Sports Authority coworker Jordan Wenner. After a constant feud, they ended their relationship in 2011.

Post her breakup with Rivera, Kailyn Lowry started seeing Javi Marroquin, while working at a mall and began dating him. The couple married on September 4, 201 2 in a Pennsylvania courthouse after dating for a little less than a year.

Lowry left for Air Force training in Texas when she was seven months pregnant with his child. She gave birth to her second child, son Lincoln Marshall, on November 16, 2013. Their marriage life started to crumble after he blamed her for a miscarriage she endured in 2015. They even named their second child Ariella Noelle. The prolonged fight between them ended in divorce in early 2016. Both were granted custody of their son Lincoln.

Kailyn Lowry made her television debut with a guest appearance as herself in the second season of MTV reality television series “16 and Pregnant” in April 2010.

Following the success of her stint in the show, she was signed as a regular cast in the spin-off series Teen Mom 2, along with Jenelle Eason, Chelsea DeBoer, and Leah Messer. She appeared in all of its eight seasons.

Kailyn’s appearance on the MTV reality television series “16 and Pregnant” and “Teen Mom 2”.

She has made quite a career for herself and has accrued a large following on social media, thanks to her appearances on reality shows. She can be found on Instagram under @kaillowry, where she has over 4 million followers. Her Facebook account @KailsOfficialFanpage is no less popular and has over 500k followers.

Kailyn also runs a YouTube channel under the name “Kail and the Chaos”. With more than 150k subscribers, she uploads videos featuring her daily lives, Q&A, DIY, and more relevant topics.

According to sources, Kailyn’s net worth is estimated to be around $500 thousand dollars.

In 2010, she was cast in the reality television series “16 and Pregnant”, which documented the teenage girls’ pregnancies and first months of motherhood.

She released her memoir entitled “Pride Over Pity” in 2014 after joining Teen Mom 2.

She followed it up with her second book “Hustle and Heart” in 2016 and released her third book “A Letter of Love” in 2018.

She has her own online store known as Pothead where she sells wide range of haircare products.

She’s got beautiful floral designs inked on both her hands.